There are so many things we can learn about investing from automated investment services, otherwise known as robo-advisories, that it staggers the mind.

After all, they're computer-driven platforms imbued with advanced Sharpe, mean variance, and Modern Portfolio Theory that produce "efficient frontier" portfolios, and whose proprietary algorithms rebalance your portfolio based on threshold continuums and your personal dreams and goals.

But there's one lesson (one you were never taught) you can learn from taking a good, long look at how these robo-advisory services construct and rebalance your personal portfolio.

Because as we're driven toward a future programmed by algorithms and dominated by fintech innovations, it's important to stop and take stock of some of the basic assumptions that will inform that future.

As you'll see, there's one fundamental assumption – upon which millions of portfolios have been built – that's simply dead wrong. 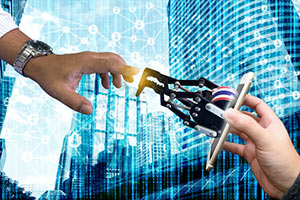 There are multiple theories about how to construct the best portfolio, whether that's an all-equities portfolio, a cross-asset portfolio, or a personal portfolio built just for you.

But before you forge that trust, you need to know a few things about how they do what they say they do.

The most important thing being how they construct and diversify your portfolio.

The second thing you have to trust implicitly is your robo-advisor's ability to rebalance your portfolio, so it doesn't "drift" away from its "efficient frontier," but moves your investments around like a master chess player, presumably like IBM's Watson using your pawn to take someone else's king.

Theory-wise, robo-advisors start out employing established principles like the "random walk." That comes from American economist Burton Malkiel's famous book, "A Random Walk Down Wall Street," which argues that markets price stocks so efficiently that professionals can't outperform market indexes. So, passive investing, in an index fund for example, is all you really need to do with your money to play the markets.

Or Wharton School Professor of Finance Jeremy Siegel's theory from his book "Stocks for the Long Run," which implies the relative risk of different asset classes depends on the holding period because, he says, stock and bond returns do not follow a random walk. Siegel has shown that stocks actually exhibit "mean-reverting" behavior and bond returns exhibit "mean-averting" behavior.

Beyond single stock price and return theories – because who would ever own a single stock – robo-advisors have to employ portfolio construction theories to diversify clients.

Whether taking a "random walk" or investing in "Stocks for the Long Run," robo-advisors are mostly all about index investing. While most of the indexed ETF products they put you in are "passive" funds, meaning they're not managed, some are passive fundamental funds, which are passive in that they aren't managed, except they are managed in terms of a manager picking which stocks meet the fundamental criteria they think will yield price appreciation or value.

The point here is that while you're supposed to believe that investing in passive indexes is passive or fundamental to sound money management, by the very nature of how they construct your portfolio and how they move your investments around, robo-advisors are trying to beat the market for you.

To create your portfolio, some robo-advisors employ Nobel laureate economist Harry Markowitz' modern portfolio theory (MPT), with its mean-variance optimization "that takes into account the overall risk of securities (or asset classes), without separating out their systematic and idiosyncratic (unsystematic) components." In other words, securities relate to one another through a specified pattern of correlation.

Or they might employ William Sharpe's theories, another Nobel laureate economist, who believes securities correlate with one another through their relationship with the market return, not on a correlation matrix as in the Markowitz model.

Whichever theories robo-advisors use to build a "personal" portfolio, they all rebalance your magic portfolio from time to time.

Generally, robo-advisors employ "threshold-based" rebalancing, which measures asset class or index weightings and whether they've "drifted" away from targeted allocations by some amount. An algorithm automatically trades in and out of positions to bring the asset allocation back to target.

That's theory for you. It's automatic; that's robo-advisory services for you.

My problem, and I have a lot of issues with how a lot of theories are being applied "automatically," with threshold-based rebalancing is that, personally, I've always made money letting my winners run and cutting my losers loose, as opposed to selling my winners to buy losers. But hey, I'm no robot.

This is where it gets interesting, so pay attention.