Legalized marijuana has been unstoppable in 2016.

You might have missed it thanks to the presidential upset, but following the Nov. 8 elections, fully 28 states now have legalized medical marijuana. Eight of those states have approved it for recreational and medical use.

That's great news for enthusiasts, but for investors, it's nothing short of amazing.

You see, marijuana advocates aren't finished with their fight. In fact, they're stepping up the pressure.

They're now eyeing the opportunities that could arise in 2017 - and beyond.

That's why today, as 2016 comes to an end, I thought it would be fun to look at voters in the remaining states - and predict which ones will attempt to legalize marijuana next.

While petition groups are working on marijuana initiatives for 2017 in almost all those remaining states, four currently "lead the pack" in the race to nationwide legalization...

For the first-place "win" bet, Vermont is out in front.

With voters in Massachusetts and Maine choosing in favor of legalization, it's only a matter of time before other states in New England start adopting pro-pot laws.

And the Green Mountain State is ripe for the picking. 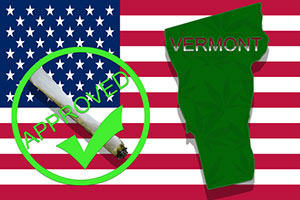 It already has an existing medical marijuana program, and in spring 2016, the state nearly legalized recreational marijuana.

Now, according to recent polls from Vermont Public Radio (VPR), 55% of Vermonters are in favor of marijuana legalization, with only 32% opposed.

Standing in the way, however, is Lt. Gov. Phil Scott.

With Shumlin, the state's biggest marijuana cheerleader, on his way out of office, his successor has a different take on legalization. During the discussion of the legalization bill, Scott raised concerns about the legislation's shortcomings.

Either way, after coming so close in 2016, the sponsors of S.B. 241 may be ready to reintroduce the measure (or a revised version) when Vermont's next legislative session opens on Jan. 4.

This time, the pro-legalization effort could go all the way.

These states are looking promising, too.

Any rumors about the possibility of Virginia approving medical and/or recreational Marijuana?

I own several of the pot stocks Michael recommended. They soared after the Nov 8 election. TWMJF climbed to 197% in one day, and is now a free trade. Since then the profits have diminished, and every pot stock I own is losing money. I know there is a profitable future for the pot industry, but why are these stocks losing money now? The next catalyst could be months away. Suggestions?
Charles B

Yea, sell now, Charles, you missed too much gain already.

I don't see Missouri going mj friendly. They shut down strip clubs several years back and the same group of religious conservatives is still in control.

I've been monitoring MJ stocks for 2.5 years 98% are scams & babble that say a lot & do less. CBDS majority share holder is under federal investigation for merchandise counterfeiting. They lied about a dividend then lied about FINRA denying it. I called FINRA they never received a application. David Tobias & Steve Kubby both are part of the HEMP SEC investigation for the brothers trading non existent shares AND the CEO ex senator Gravel is 86 years old! LMAO who has a 86 year old CEO?
You want to see the next pump come back in March 2017 before the 4-20-17 pump & dumps. Same crap every year!

Charles, I also took a beating after the election. People are waiting for a signal that the extermly poor choice for Attorney General will take the practical course as opposed to trying to turn back time to the Nixon era

I have 8 pot stocks never payed more than 90 cents lots of profit more to come cover every base vapes reits eatables cbd $ thc soil lights that attorney general s. jeff could be some problem ????

Has anyone – have Info on "Genesis Investors" ?

MARIJUANA SHOULD BE LEGAL IT DOESN'T HARM ANYONE.

Legal is fine for those over 25, when your brain is fully developed. Under that it is known to harm and for some it causes schizophrenia.

I have invested in three of the recent stocks mentioned today. Slow and steady… up, up, up .to the moon.
I do have a question I would like an answer to. I need to know the criteria, requirements to grow and cultivate cannabis in central Illinois. I have 40 acres I would love to plant.