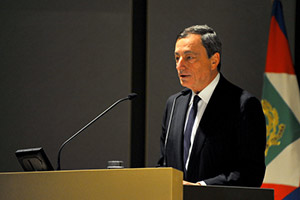 The Dow Jones Industrial Average hit a new all-time high thanks to a surprise boost in financial stimulus by the European Central Bank (ECB).

This morning, the ECB announced it would maintain interest rates at their current levels and extend its quantitative easing program through December 2017. The central bank said it will maintain its purchasing level at 80 billion euros per month and drop that figure down to a pace of 60 billion euros each month for the duration of the year.

The ECB is attempting to spur economic growth in the world's largest economic bloc.

The Nasdaq and the S&P 500 also rallied thanks to gains in tech stocks and a huge earnings report from Lululemon Athletica Inc. (Nasdaq: LULU).

It was a light day of economic data, which drew special attention to this morning's announcement on weekly jobless claims. Last week, the number of Americans seeking unemployment benefits retreated from a five-month high.

The markets have almost fully priced in a rate hike during the December FOMC meeting, pushing banking stocks even higher. Shares of Bank of America Corp. (NYSE: BAC), JPMorgan Chase & Co. (NYSE: JPM), and Wells Fargo & Co. (NYSE: WFC) all increased by at least 1% on the day. The markets are still looking for clues on Fed's 2017 monetary policy plans and how they will mesh with the fiscal policy plans of the president-elect.

The WTI crude oil price today ticked back above $50 and finished the day up 2.1%. Meanwhile, Brent crude gained 1.7%, despite increased skepticism that OPEC will be able to follow through on its planned production deal to cut crude output. This week, Money Morning Global Energy Strategist Dr. Kent Moors offered his latest price forecast and explained what will happen next for OPEC as 2017 approaches. Check out his latest insight, right here.

Big news slipping under the radar is President-elect Trump's statements on China. As you might have heard, some economists are concerned that the incoming administration is willing to start a trade war with China. You also might have heard that his recent telephone call with Taiwanese President Tsai Ing-wen was a "gaffe," and one that could stir problems between China's leadership and the United States.

But Money Morning Chief Investment Strategist Keith Fitz-Gerald explains that this was not a "gaffe" and that what Trump is doing is actually a brilliant strategy. Fitz-Gerald has an important message to investors: You can make a lot of money thanks to this major Trump profit play.