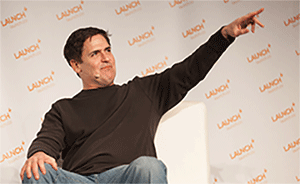 It came to light yesterday before the multibillionaire spoke to Congress in support of the proposed AT&T-Time Warner merger.

Cuban's backing of the deal wasn't particularly controversial or unexpected.

But what he said just beforehand sure was...

Pre-testimony, Cuban spoke to CNBC's "Fast Money Halftime Report." And it was during this segment that the reality star likened President-elect Donald Trump to a "number one draft pick."

"He's who we put our hopes and dreams with. Now it is easier because we haven't played a game yet," Cuban, a longtime supporter of Democratic presidential candidate Hillary Clinton, said. "No reason to rush to judgment or come to any conclusions now. Let's see what happens starting Jan. 21 and we'll go from there."

Cuban's "no reason to rush to judgment" suggestion directly contradicted previous statements he'd made over the course of a year.

In fact, the Shark Tank star spent the better part of 2016 lambasting the president-elect during his campaign - even going so far as to predict an entire industry's upheaval under a President Donald Trump...

Well, he wants the merger approved so he's sucking up to the majority. That's pretty transparent ;)

Grow up all you jealous people. You may not like Mark or Trump or your in-laws but whatever may be the case, Mark, in my opinion, is NOT sucking up to Trump, he "researched" Hellory in the final election campaign stretch and obviously found much bad faults in every which way. Therefore, finding good with Trump, his being an honest and loyal country citizen equally successful in sports and business, made a positive move. I really do NOT feel that Mark will such-up to nor will Trump favor Mark any more that any other person :-)

Mark, I heard your speech at the Democratic Convention and the statements you made after that. I just received this copy of Money Morning and it has an article that says you have changed your mind and now support Trump.
That is very disappointing to me, especially with everything that has happened in the past 3 weeks. Can you tell me why you changed your mind?
btw, I now live in Texas City (suburb of Houston).

Anyone can just type in on your computer or iPad these (4) words….the Clinton body count….it's not a book, no cspitballs needed.. They started out in Arkansas, now called Arcancide….just page down and read…you won't believe your eyes…..OH AND MARK CUBAN, you could do some reading yourself…so many uneducated people. Do your due diligence before you make a recommendation. Engage brain before mouth…..????????

Money is the root of all evil!NOT SURPRISED!