One of these headwinds is the U.S. dollar. It has appreciated over 4% since Donald Trump won the presidential election on Nov. 8. As the dollar appreciates in value, dollar-denominated commodities like gold lose some appeal because they're worth less. 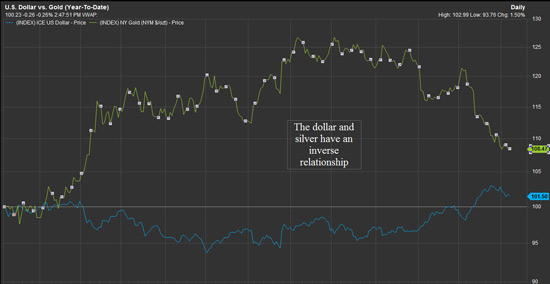 Lastly, upbeat data from U.S. durable goods orders pushed the price of gold down last week and may continue to impact prices in the next few weeks.

As the New Year approaches, however, there are many upcoming events and policies that will support a gold price rally

It's all here in our latest gold price forecast, along with our specific gold price target...

Our Gold Price Forecast and Price Target for 2017

A bottom for gold prices could be approaching, and that points to a future rally...

The SPDR Gold Shares ETF (NYSE: GLD) has seen $2 billion of gold outflows in November, Krauth said. That was one of the worst months in the past three years, largely because of the headwinds we mentioned earlier. But this negative sentiment will likely fade over time, and Krauth believes that GLD's performance signals the price of gold is bottoming out.

Looking ahead, there are two likely positive catalysts for gold prices.

One is the upcoming Federal Reserve interest rate hike on Dec. 13-14. While it isn't a sealed deal, there is an over 90% chance the Fed will raise rates, according to the CME Group's FedWatch Tool.

"If history rhymes," Krauth said, "that could mark a turning point for the current correction. Around this same time last year, gold bottomed out at $1,050. What followed was a rally for the record books."

Another rate hike could send stocks plummeting just like last year, when the S&P 500 fell nearly 10%. This could spark a gold rally into the New Year, Krauth said.

Another possible catalyst is the mid-March 2017 debt ceiling deadline. The deadline could be a major discussion in gold's favor. Remember, any time uncertainty or panic strikes, gold is there to save the day with its safe-haven appeal.

Taking all of these factors into account, gold prices could see a $200 rally within a few months, according to Krauth.

"And while it still seems like a long shot from here," he said, "I also think $1,300 is still possible within the next few months."

Gold prices are currently trading at $1,167.60 per ounce as of Wednesday intraday.

Up Next: We've just spotted a gold anomaly that could create cash windfalls of up to $13 billion. This phenomenon is so rare, it has only occurred three times in the past 20 years. Act now, and you could get a piece of this historic profit opportunity. Details here...

what is India doing I don’t understand.Could you give a little more clarity as to whats going on and what it all means. Thank-you.

one more uncertainty: tThe possibility to own gold in muslim countries from jan 1
2017