At close yesterday, the price was $3.55 per 1,000 cubic feet, or million BTUs (British thermal units), the standard measurement in the United States.

Traditionally, natural gas prices in the United States have been heavily influenced by the seasons, with the severity of winters generally being the main determinant of how high prices would go.

With demand for natural gas coming from many new sources, the price is no longer tied to the weather - setting prices up to go higher.

Here's exactly how high the price of natural gas will go in 2017...

Believe It or Not, People Used to Worry About a Lack of Gas 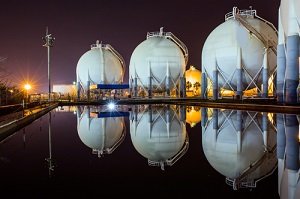 Almost a decade ago, prices jumped above $13 as the result of something else...

Back then, the concern was supply. There was not enough natural gas to meet expected demand, even without considering the newer end-uses for natural gas that we'll talk about in a moment.

I remember sitting in a 2005 meeting of market experts where everyone around the table agreed that at least 15% of natural gas consumed in the United States would have to be imported as liquefied natural gas (LNG) by 2020. At least 40% of the rest was expected to come from Canada via pipeline.

Well, along came shale and tight gas - and the picture was fundamentally changed. Today, significant reserves of this "unconventional" natural gas have fundamentally altered the domestic market mix.

This massive shift has led to two results. First, surplus supply inside the United States ballooned. Second, the price started coming down - and fast.

As the cost of drilling declined and the amount of extractable gas consistently exceeded estimates, serious discussion emerged about America becoming energy independent, a target likely to become reality even quicker when the prospects for a similar Canadian shale boom is taken into account.

But this rush into shale came with its own cost...

Natural Gas Drillers Became the Victims of Their Own Success

In addition to environmental concerns over the fracking necessary to bring the gas up, the sudden additions to the national surplus produced significant pressure on the sector itself. A rising number of operating companies were threatened by the sheer size of the changes underway.

A natural gas well, even one in a shale play, is much cheaper to drill than anything beyond a very shallow (2,000 foot) oil well. However, a shale well's primary production comes in over the first 18 months, after which it quickly declines. So producers have a much bigger front-loaded volume flow.

The combination of these two factors has run through smaller producers like a wild fire. Combined with the knock-on effect of a major move down in crude oil prices, a rising number of companies came under siege.

Producers needed to replace declining production rates with new wells that were justified as replacement but hardly viewed by the market as such. The combined spike in surplus production just put additional downward pressure on the price of natural gas and further reduced the profitability at the well head (where companies get paid well below the final market price).

Now, companies will regularly hedge contracts forward to shield themselves from declining prices. But that approach only works if there are genuine prospects that prices will improve. Otherwise, the cost of hedging becomes untenable.

At the current price for natural gas, companies are once again getting access to money (through debt and issuing new stock) needed to subsidize forward operations. This used to be the norm, with most producers operating cash-poor - bringing in less from gas sales than current operations cost. The difference was covered by debt or selling new stock, with sale revenue used for acquisitions, dividends, or stock buybacks.

Increasing field efficiency and new technology has further lowered costs. With natural gas trading north of $3.50, wells in basins such as the Marcellus are now profitable. But this is still a precarious balance...

My Natural Gas Price Forecast for 2017