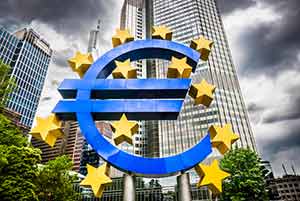 We are now within striking distance of Dow 20,000, and the odds are that we could see that new record high any day now. So, when exactly will we see Dow 20,000? Money Morning Capital Wave Strategist Shah Gilani has that answer, right here.

On Thursday, the Dow hit another record high - adding 65 points - as the Donald Trump market euphoria continues full steam ahead. The combination of increased European stimulus and positive jobs data added fuel to a red-hot market.

The Dow is projecting a 20-point gain as investors anticipate another record high in the wake of the European Central Bank's announcement that it will extend its quantitative easing program. The ECB announced on Thursday that it plans to maintain interest rates at their current levels and extend its bond-purchasing program through December 2017. The central bank plans to continue its buying pace at 80 billion euros per month through March 2017. But it will drop that figure down to a pace of 60 billion euros each month for the duration of the year.

Investors are keeping an eye on the U.S. Federal Reserve as the central bank plans to meet next week to discuss its first possible interest rate hike since December 2015. According to CME Group's FedWatch Tool, the odds of a rate hike during next week's meeting sits at 97.2%.

The WTI crude oil price today is ticking 0.9% higher this morning - just a notch above $50 per barrel. Meanwhile, Brent crude added 0.6%. Crude prices are pushing higher on word that OPEC plans to meet tomorrow in Vienna, Austria, to discuss how it will collaborate to meet its targeted production cuts that it agreed upon in November. The world's largest oil cartel will also attempt to lure nonmember nations Sudan, Russia, Azerbaijan, and Mexico into the deal to help bolster crude prices.

But the big news this morning is the mighty U.S. economy. It was difficult to predict early this year that a wave of optimism would spread and bring capital off the sidelines at the same time that Americans would be saying the words "President Donald Trump." But plans for massive tax cuts, big boosts to military expenditure, and an ambitious infrastructure program can all be expected to give the economy (and stock prices) a significant shot in the arm.

So, how can you profit from these trends?  And what should you expect in the year ahead? Stuart Varney of FOX Business' "Varney & Co." invited our Capital Wave Strategist, Shah Gilani, on his program to find out whether we're due for more growth and stronger markets in the future. [Editor's Note: Watch his outstanding interview and start profiting today.]