Many investors only focus on buying stocks, or taking long positions, while overlooking the huge profit potential of the top stocks to short.

Shorting is a great option if you believe a stock will go down. By shorting stocks, you're betting against a stock's performance (for more information on how to short stocks, check out our complete beginner's guide).

Take one of the stocks on today's list, for example. Since peaking last December, this stock has fallen 85%. While shareholders are looking at 85% losses, those who shorted the stock have made a massive windfall. 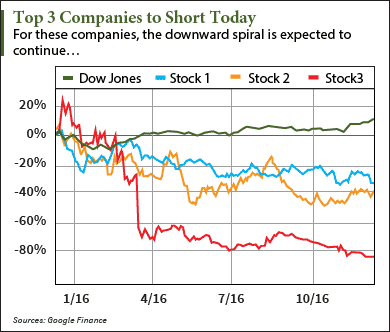 When it comes to shorting stocks, having the right timing is crucial. What makes these three stocks some of the best stocks to short is that they are all expected to disappoint in their upcoming Q4 earnings reports.

Even though these stocks have all been falling in 2016, each one is still overvalued. Getting in now allows you to ride the crash that will surely come as the news of poor earnings breaks.

Top Stocks to Short No. 3: Valeant

When Valeant Pharmaceuticals International Inc. (NYSE: VRX) reported its dismal 2016 third-quarter earnings on Nov. 8, the stock price dropped over 20% from $19.13 to $14.98 in a single day. With another disappointing earnings report expected in the first quarter of 2017, VRX is a great stock to short.

The reason the Valeant stock price fell so fast was a drop in revenue of 11% for the quarter ending in September. It also reported an earnings loss of $0.39 per share, which is far below the $0.14 profit for the same quarter last year.

Valeant's branded prescription segment accounts for more than one-third of its total revenue, and it saw a 30% decrease in year-over-year sales. This problem is only likely to get worse since a generic for Xifaxan (an IBS drug) is expected on the market in 2017 or 2018.

Xifaxan is just one of Valeant's drugs that will be losing its patent in the next several years. Generics can enter the market once patents (20 years) and exclusivity (seven years) expire. Price pressure from generics entering the market is another reason Valeant is one of the best stocks to short for 2017.

And all that bad news is just scratching the surface. The worst news is that Valeant has been dealing with investigations from the Department of Justice into its pricing practices and defrauding insurance company allegations. Several investigations have been opened because of huge drug price jumps after Valeant purchases.

The criminal investigations began in October 2015, and the stock price has been on a steady decline. The declines started in the summer of 2015 with accusations of being the "next Enron" by Citron Research. Valeant's stock price peaked in August 2015 and is down 94% since its peak price.

Money Morning Global Credit Strategist Michael Lewitt warned that Valeant was likely to go bankrupt back in April, which is why it is one of the top stocks to short.

"This company is functionally insolvent from a balance sheet perspective," Lewitt said. "It has cash flow but not nearly enough to repay its $30 billion debt. I think we are looking at a bankruptcy… very soon."

Top Stocks to Short No. 2: Sears

Lewitt first warned investors that Sears Holding Corp. (Nasdaq: SHLD) was headed for disaster in December 2014. Since then, it has dropped more than 63%, netting investors huge gains if they followed his advice to short this stock.

Sears' cash flow from operations was a loss of $2.2 billion in 2015. The company is trying to reduce costs, but that won't be a major help unless revenue dramatically increases. Given the current state of the retail industry, large revenue increases are not expected.

The internet is eroding the retail industry. In 2015, e-commerce sales were 7% of all retail sales in the United States, almost double the market share of just five years prior.

A survey of retail store visits by PwC found that store visits were down over 50% from 2009 to 2013. This shift to internet purchasing will make a Sears turnaround even more difficult.

Sears has been unable to secure inventory financing from factoring companies since at least 2014. This is "the kiss of death in the retail industry," as Lewitt terms it.

Lewitt is so confident that Sears will continue its slide downhill that he said, "The truth is, no short portfolio is complete without this train wreck."

One of the top stocks to short has seen profits decline by over 90%, making the 20% YTD stock fall just the beginning…