(Kitco News) – The feature in the marketplace to start the trading week is sharply higher crude oil prices. Nymex crude oil futures prices hit a 16-month high of $54.51 overnight and are up by over $2.00 a barrel in early U.S. trading.

OPEC and non-OPEC oil producers on Saturday came to an agreement to cut their collective oil production by just over a half-million barrels a day, which does not include the 1.2 million barrels a day that OPEC already agreed to cut in September. Reports said the combined cuts represent about 2% of the world oil supply. 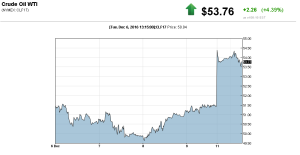 World stock markets were mostly weaker Monday, on corrective, profit-taking pullbacks from recent solid price gains that put several world stock indexes at multi-year or even record highs. Asian stock markets also felt selling pressure due to China's crackdown on stock purchases by insurance companies and by comments from U.S. President-Elect Donald Trump, who questioned the U.S. "one China" policy that has been in place for over 40 years.

Gold prices hit another 10-month low overnight amid a lack of fresh, bullish fundamental news for the safe-haven metal, whose prices have been trending sharply lower for the past month.

U.S. Treasuries prices are lower Monday, with the yield on the benchmark 10-year Treasury note climbing above 2.5% for the first time in two years.

The sharp gains in oil prices are prompting keener notions of rising inflation, and that's bearish for fixed-income assets.

The spot gold market is started the week with renewed weakness as prices traded lower overnight, hitting a session high at $1,159.60 an ounce and a session low at $1,151.10 an ounce. 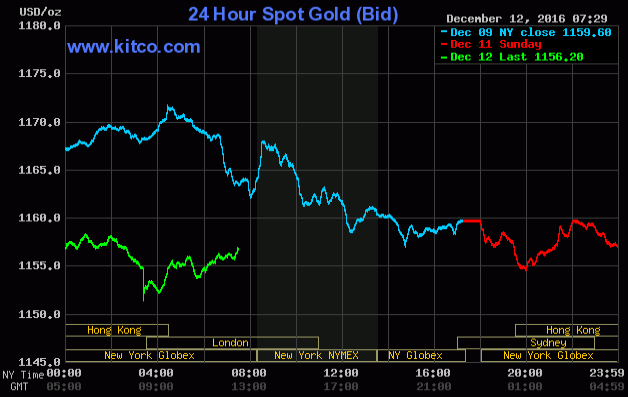