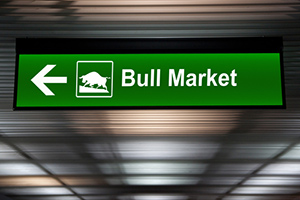 The Dow Jones Industrial Average today is steamrolling toward the 20,000 level as the post-election rally continues.

The Dow is now up more than 8.5% since Nov. 8 as investors continue to push stocks higher on increased optimism for the U.S. economy under President-elect Donald Trump.

With the Dow within striking distance of the 20,000 mark, investors are wondering when we could see the index surpass this critical psychological mark.

This morning, the Fed Open Market Committee kicked off its final two-day meeting of the year. The markets expect that the Fed will increase interest rates on Wednesday for the first time since December 2015. But the central bank could surprise the markets tomorrow. The Fed has to consider the pending fiscal policies of President-elect Trump and the possibility his policies could increase inflation.

But the big comments of the day come from Microsoft Corp. (Nasdaq: MSFT) founder Bill Gates. Following a meeting with President-elect Trump, Gates suggested that the future leader's policies and focus on American innovation are comparable to John F. Kennedy. Gates told CNBC this morning that innovation will be critical to solving problems in the clean energy sector.

The billionaire software maker and humanitarian also said that he thinks stocks are getting very expensive during the post-election rally.