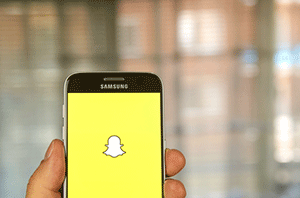 The Snapchat IPO could debut as early as Q1 2017, which is why we wanted to make sure our readers received our latest Snapchat stock recommendation before the IPO date.

Today, we're going to share our recommendation for how to play Snapchat stock ahead of the IPO.
But first, here's more information about what Snapchat is and why it's so popular…

Snapchat is a social media app that allows users to send photo and video messages. Users can add animations and doodles to these messages, and the messages will disappear after several seconds once they are viewed.

Snapchat has a strong following among teens and millennials. According to Bloomberg, 70% of 18- to 24-year-old Americans with smartphones use the app.

But older social media users are also starting to use Snapchat…

That's an increase of 41% in three years.

Snapchat's "Sponsored Lenses" were launched in 2015. They allow users to take a picture or video with different filters that are paid for by an advertiser.

These lenses can cost up to $750,000, and big companies are signing up to use them in campaigns. For example, 20th Century Fox used lenses to promote "The Peanuts Movie."

Lenses will generate $102 million in revenue in 2016, according to eMarketer.

Snapchat also allows companies to buy advertising space. Revenue from video ads on Snapchat is projected to reach $250 million for 2016.

Finally, Snapchat also has a new physical product for sale.

"Snapchat Spectacles" are a pair of sunglasses that can record up to 10 seconds of video. The video can be posted directly to Snapchat wirelessly. These unique glasses retail for $129.99 but are only available in vending machines in limited locations right now.

And with all this revenue, Snapchat has a lofty valuation…

Snapchat had a valuation of $25 billion at the beginning of 2016. However, that could climb as high as $40 billion by the time of the Snapchat IPO.

That's because Snapchat's revenue is expected to skyrocket…
In 2015, Snapchat generated just $60 million in revenue. That total is expected to climb to $367 million in 2016, which would be a year-over-year increase of 511%. 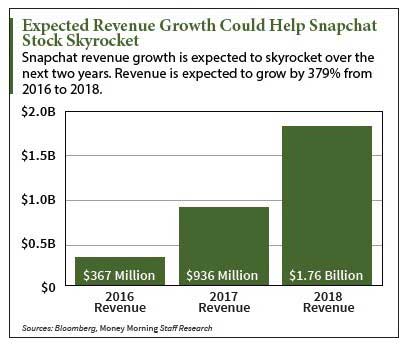 But does skyrocketing revenue alone make Snapchat stock worth owning?
Here's how to play the Snapchat IPO…

Money Morning Chief Investment Strategist Keith Fitz-Gerald warns that Snapchat could be one of the most dangerous IPOs in history.

"Silicon Valley's hype machine has gone into overdrive in recent years and successfully convinced millions of investors that the only way they'll make a killing is to be on board or they'll miss out," Fitz-Gerald said on Nov. 21.
You see, IPOs are set up for wealthy investors to make the most money.

That's because wealthy investors and large institutions are able to invest in an IPO before retail investors.

"Millions of 'mom and pop' investors are itching to get a piece of the action believing that they're going to make a fortune when getting burned is far more likely," Fitz-Gerald said.

Investors should also be cautious about investing in Snapchat stock because tech stocks are volatile after IPOs.
After opening at $30.40 per share on June 18, 2015, shares of Fitbit Inc. (NYSE: FIT) stock are now down 74% since its IPO. Shares of GoPro Inc. (Nasdaq: GPRO), which began trading on June 26, 2014, are now down 67%.

Fitz-Gerald says there's only one way to play the Snapchat IPO, and that's as a speculative investment.