This year has been something of a tease for gold investors - but our gold price prediction for 2017 sees the yellow metal going much higher. 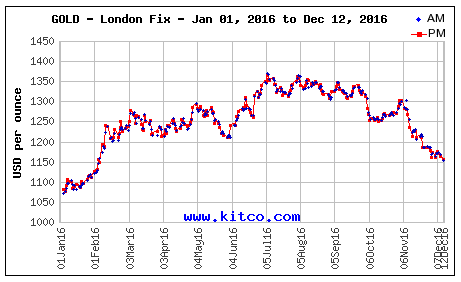 Many gold analysts were convinced this rapid rise in gold prices signaled the start of a new gold bull market.

But then gold reversed direction...

Since that July 6 peak, gold prices have slipped 15% to $1,160, raising questions about whether gold's bear market - which started in September 2011 -- was really over.

And Wall Street's gold price predictions for 2017 have clarified little...

But Dutch bank ABN Amro Group NV's 2017 gold price prediction sees the yellow metal sliding below $1,100 an ounce, while the gold price forecast of UK trading firm IG Group Holdings Plc. puts it below $1,000 by the end of the year.

And the 2017 gold price prediction from Citigroup Inc. (NYSE: C) is basically flat - a slight drop early in the year followed by a slight gain in the latter part of the year.

But for long-term gold investors, what matters right now is that we're close to the end of the 2011 bear market. Whether the turnaround starts in January or later in 2017 doesn't matter that much, considering the gains that lie ahead...

Why a Gold Bull Market Is on the Horizon

First of all, the current gold bear market, at 62 months, is well beyond the average age of 50 months. It's due to reverse.

Gold prices are also near a typical bear bottom.

This suggests that even if the ultimate low for gold prices lies in 2017, it won't be that much lower.

On the other hand, the next gold bull market will prove extremely profitable - as this next chart shows...

I think it will fall further by another US$ 50

nobody knows what will happen to any price