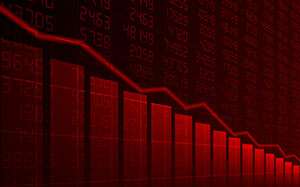 The announcement pushed the U.S. dollar even higher and commodity prices lower. Oil prices slumped and dragged down energy stocks in the process.

The Dow Jones briefly hit a new intraday record high but retreated after Federal Reserve Chair Janet Yellen announced the central bank would raise its benchmark interest rate. The Fed increased its target benchmark range from "0.25% to 0.5%" to "0.5% to 0.75%."

The rate hike was mostly priced into the market heading into the December FOMC meeting. However, Yellen also said the bank expects three more rate hikes in 2017.

Before we get into how and why the central bank increased interest rates on Wednesday, it's important to have an investment strategy for the road ahead. That's why we've put together this guide on how to invest after an interest rate hike.

So why did the Fed make this decision? With President-elect Trump taking office in January, economic conditions are rapidly changing. The U.S. job market has shown increased strength in recent months, and inflation is ticking upward. In fact, the Fed said that inflation had moved up "considerably" in its statement released this afternoon. The Fed also increased its economic growth outlook for 2017 from 2.0% to 2.1%.

Of course, Trump's economic policies – which include corporate tax reform, a more streamlined income tax code, and significant infrastructure spending – could accelerate both economic growth and inflation in the years ahead.

The Fed's decision to raise interest rates bolstered the U.S. dollar against a basket of international currencies. Gold prices fell below $1,150 per ounce, while silver prices remained flat.

But the bigger impact of the strong dollar was felt among oil traders. Crude oil prices slumped due to a combination of a rising dollar and concerns about a global supply glut. The WTI crude oil price today fell by more than 3% after the Energy Information Administration (EIA) reported rising inventory levels at the key crude hub in Cushing, Okla. It was the sixth straight week of inventory builds at the facility. However, the EIA also reported a total U.S. inventory decline of 2.6 million barrels, when analysts had expected a build of roughly 1 million barrels of crude oil.

Optimism about the president-elect's economic policies has companies around the world committing capital and plans to hire American workers in droves. The latest announcement comes from International Business Machines Corp. (NYSE: IBM). The technology giant – whose CEO Ginny Rometty is now an economic adviser to Trump – has committed to hiring roughly 25,000 workers in the United States and to invest about $1 billion in job training.

There are so many reasons why it's a superb time to invest in healthy American companies that have a global reach. And there's one stock Money Morning Executive Editor Bill Patalon sees as one of the top stocks to buy in 2017. Read about it here.