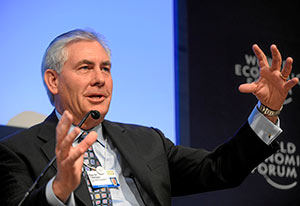 "I have concerns," McCain admitted. "It's very well-known that he has a very close relationship with [Russian President] Vladimir Putin."

Tillerson has been under scrutiny since President-Elect Donald Trump officially named him as his choice for the next U.S. secretary of state on Tuesday morning.

In this new role, Trump said Tillerson would "promote regional stability and focus on the core national security interests of the United States."

But U.S. legislators - especially those from the GOP, like McCain - aren't completely convinced...

"Mr. Tillerson is a talented businessman with a great deal of international business experience," Graham said, according to Yahoo News. "I look forward to meeting Mr. Tillerson and discussing his world view - especially his views of the U.S.-Russian relationship. Based upon his extensive business dealings with the Putin government and his previous opposition of efforts to impose sanctions on the Russian government, there are many questions which must be answered. I expect the U.S.-Russian relationship to be front and center in his confirmation process."

That confirmation process involves Tillerson's appointment first passing through the Senate Foreign Relations Committee before the larger branch as a whole can vote either "yea" or "nay" on his nomination.

And right now, several Senate members are looking over Tillerson's ties to Russia with skepticism...

You see, 64-year-old Tillerson has worked for Exxon his entire life and came up through the ranks by managing its Russia account.

It's because of this job that his close relationship with Moscow not only developed, but actually flourished.

In fact, it was Tillerson's masterful ability to convince the Soviets that a Moscow/Washington oil alliance would handsomely profit both nations that cemented his succession of Lee Raymond as CEO of Exxon in 2006.

Once at the oil giant's helm, Tillerson made good on his promise to Russia and bet roughly $500 billion on the eastern country's vast but elusive oil resources via a bold partnership with Moscow's drilling leviathan, Rosneft.

In 2011, an official deal was struck between Rosneft and Exxon, after which the two companies focused solely on drilling in three key Russian regions:

Putin himself attended the 2011 signing ceremony for the deal, which is majority-owned by Moscow.

Don't Miss: How to Turn Trump's Twitter into Your Secret Investing Weapon

Immediately afterward, Rosneft's valuation shot up $7 billion over the course of five days.

The partnership also gave Russia the chance to get a stake in Exxon's North American projects, including ones in West Texas and in the deepwaters of the Gulf of Mexico.

In 2013, Putin awarded Tillerson the "Order of Friendship," which is given to foreign citizens for "special merits in strengthening peace, friendship, cooperation, and mutual understanding between peoples," reported CNN yesterday. It is also awarded for those who make a "great contribution" to "large-scale economic projects" in Russia.

And for about one more year, the mutually beneficial partnership between Rosneft and Exxon played out swimmingly.