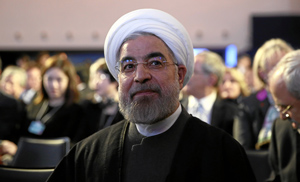 Iran warns of an inevitable World War III that includes the annihilation of Israel if U.S. President-elect Donald Trump breaches the 2015 nuclear deal between Tehran and Washington.

The pact, signed on July 14 last year, dropped crippling international sanctions on Iran in exchange for the relinquishment of the country's nuclear capabilities. It went into effect in January 2016, and all sides have largely abided by it... so far...

But on Sunday (Dec. 12), Iranian Defense Minister Hossein Dehghan said such peace wouldn't last should Trump actually attempt to deliver on his campaign promises about the Iran nuclear deal.

"Enemies may want to impose a war on us based on false calculations and only taking into consideration their material capabilities," Dehghan said, according to The Daily Mail on Sunday. "Such a war would mean the destruction of the Zionist regime (Israel)... and will engulf the whole region and could lead to a world war."

Here's what Trump specifically promised to do that has Tehran so heavily on the defensive...

On July 15, Trump vowed to "redo" the 2015 nuclear deal between the United States and Iran.

"[It's] one of the worst deals I've ever seen negotiated," Trump said, according to The Washington Post.

He then outlined his reasons for considering the accord "disastrous" and imbalanced.

"Obama, the UK, Russia, China, France, and Germany were on one side [of the deal]," the real estate mogul explained, "and Iran [was] on the other."

Trump promised that, once he assumes office, he'll either "redo the deal" completely or just tear it up.

These claims put the international community on edge and even prompted China to issue a warning of its own...

On Dec. 5, China stated that Iran "should not be affected by any changes in the domestic situations of the countries concerned [with the Iran nuclear deal]."

Should Trump make good on his promise to nullify the deal, China went on to explain, he would also risk alienating Russia.

And on top of all that, Beijing warned the entire international community would still refuse to re-impose such sanctions against Iran, as many countries have already started making trade deals with Tehran.

"Iran will not allow any country to take unilateral action to violate the agreement, and Iran has the right to take action against that," Iranian Foreign Minister Mohammad Javad Zarif chimed in on Dec. 5. "All parties to the agreement are obliged to implement it."

Regardless of these dire warnings from varied international countries, Trump - with the help of Washington as a whole - seems to be preparing nonetheless for the massive deconstruction of President Barack Obama's signature foreign policy achievements...

Congress Acts in Spite of All the Warnings

Regardless of Iran and China's warnings, the U.S. Senate still voted 99-1 to extend the Iran Sanctions Act for 10 more years - which was scheduled to expire at the end of this year.

You see, Washington maintains a host of other sanctions on Iran related to human rights abuses, support for terrorism, and the Iranian ballistic missile program.

The extension bill does not directly address the nuclear deal, and the White House can issue waivers for sanctions to comply with the accord.