(Kitco News) – The feature in the marketplace Thursday is a surging U.S. dollar index that soared to a 13-year high overnight. The greenback is the beneficiary of a U.S. interest rate hike on Wednesday that was accompanied by a surprisingly hawkish tone on monetary policy from the Federal Reserve. There is now talk the Fed could raise interest rates up to three times in 2017. 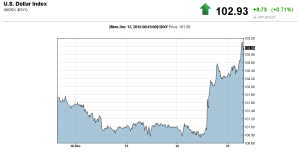 Victims of the sharp appreciation of the U.S. dollar are raw commodity markets that are priced in U.S. dollars on the world markets, including gold prices that slumped to a 10-month low overnight. World stock markets also set back overnight, following the lead of U.S. share declines posted Wednesday. European stocks did post a rebound from losses suffered earlier in the session Thursday. U.S. stock indexes are pointed toward firmer openings when the New York day session begins.

yields) amid the specter of the Federal Reserve and other major central banks of the world beginning to rein in their heretofore loose monetary policies. The U.S. 10-year Treasury bond's yield rose to a two-year high of 2.6% Thursday, in the wake of the Fed rate hike.

In overnight news, the Bank of England left its interest rates unchanged at its regular monetary policy meeting Thursday. The Euro zone's December composite purchasing managers' index (PMI) came in at 53.9, which was the same as the November reading. The December reading was just below market expectations.

The other outside market on Thursday sees crude oil prices trading slightly higher. The oil bulls appear to be tired after spiking prices to a 16-month high earlier this week. In fact, Monday's spike high and then prices backing way off are technical clues the crude oil market has put in a near-term top. 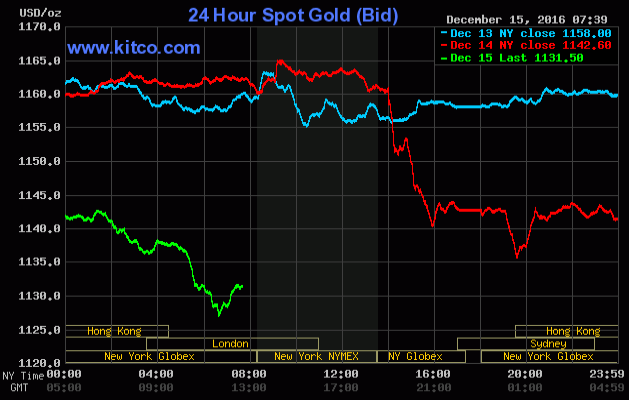