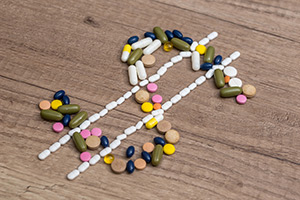 Some of the most outrageous drug price increases of 2016 have placed huge burdens on patients and caregivers alike.

According to an Oct. 11 report funded by the American Hospital Association (AHA), total net spending on prescription drugs by hospitals this year is up to $309.5 billion, making prescription drugs the fastest-growing segment of the healthcare sector.

Consumers are facing price increases with name-brand drugs as well as with their generic counterparts.

We've selected a few of the most outrageous drug price increases from 2016 below. Have a look and see if your medication made the list...

Most Outrageous Drug Price Increases of 2016 No. 5

Hospira, a Pfizer Inc. (NYSE: PFE) company, makes one version of the drug that can be administered by trained medical staff.

Sen. Bernie Sanders (D-VT) vilified companies like Pfizer in a statement on May. 13, saying, "Opioid abuse is an epidemic across our country, yet drug companies continue to rip off the American people by charging the highest prices in the world because they have no shame."

Most Outrageous Drug Price Increases of 2016 No. 4

Evzio is another form of the drug naloxone that does not have to be administered by trained medical personnel. Kaléo Inc., which makes this version of the drug, has raised prices by over 550% in just two short years - from $690 in 2014 to $4,500 in 2016.

Evzio provides verbal and visual guidance to the person administering the injectable medication, which makes the necessity of immediate medical staff obsolete.

"Making this product available could save lives by facilitating earlier use of the drug in emergency situations," said Bob Rappaport, M.D., the director of the Division of Anesthesia, Analgesia, and Addiction Products for the FDA, in a press announcement when the drug was released in April 2014.

But, again, such price gouging renders the lifesaving drug practically unattainable to those who likely need it most - the impoverished and the addicted.

Regardless, a 550% drug price hike is peanuts compared to the price tags companies slapped on these next medications...

Most Outrageous Drug Price Increases of 2016 No. 3

Baxalta, part of Shire Plc. (Nasdaq: SHPG), raised the price of a cancer drug more than $10,000 practically overnight after acquiring the rights to it.

Don't Miss: The Cures Act Is One Massive Handout for Big Pharma

Oncaspar is used as part of a chemotherapy regimen for acute leukemia and is the only alternative for people who suffer from an allergy to its sister medication, asparaginase.

Because of Oncaspar's outlandish price, hospitals are now having to come up with alternative plans for its dispersal, such as rationing.

"It's going to get to the point where it could become an ethical dilemma," warned Fred Bender, Director of Pharmacy at the Greenville Health System, to Greenville Online on Dec. 9.

When questioned about the price adjustment, Baxalta claimed that the dramatic increase in the price of Oncaspar will help fund testing of new formulations, according to Bloomberg on Feb. 2.

Most Outrageous Drug Price Increases of 2016 No. 2

Of course, we can't forget about Mylan's epic EpiPen price controversy from earlier this year.

Nationwide fury erupted. Over 3.6 million Americans depend on the drug - most of them children, reported The Wall Street Journal on July 25.

To make expensive matters worse, the pens expire after one year, so patients who have a leftover supply will be forced to fork out the extra $540 regardless.

"Now it's going to cost me more than $2,000 to buy the packs when the current supply expires," said Jennifer Donnelly to The Wall Street Journal on Aug. 24. "It's insane for a medication you hope you never have to use."

Most Outrageous Drug Price Increases of 2016 No. 1

Valeant Pharmaceuticals International Inc. (NYSE: VRX) is a company we've been warning you about since last year. Valeant recently raised the price of Carac cream, which is used to treat pre-cancerous skin lesions.

Money Morning Global Credit Strategist Michael Lewitt has made a habit of recognizing "rotten companies" like Valeant before most, and he warned his readers last October about the signs of failure for the pharma giant.

"Companies that engage in unethical behavior are not investable," Lewitt said in April. "The company's business practice of raising drug prices by exorbitant amounts while short-changing research and development was short-sighted and, in my view, politically vulnerable."