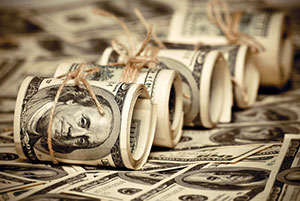 Last week, the U.S. central bank increased interest rates for the first time since December 2015. Today, Yellen will speak at the University of Baltimore 2016 Midyear Commencement.

On Friday, the Dow dipped eight points but remained within striking distance of the critical psychological barrier of 20,000.

The Dow Jones industrial average projected a 14-point gain as we enter the final two weeks of the 2016 trading calendar. During the last two weeks, the markets can expect lower than average volumes, but that doesn't mean we couldn't be in for a few surprises. This week, the markets will receive a few key data points in the housing markets and a third and final update on the third-quarter gross domestic product (GDP).

Gold prices are trading modestly up Monday on short covering and perceived bargain hunting after prices hit a 10-month low last week. Money Morning Resource Specialist Peter Krauth explains that we just saw a very tough week for gold prices. And he outlines where gold prices are heading next with the Federal Reserve's rate hikes in focus. Read more here.

With interest rates on the rise, investors are wondering if the post-election rally is over. But here at Money Morning, we recommend that investors buy stocks now that can outperform the market regardless of what the Fed does with interest rates. That's why we've put together this guide on how to invest after an interest rate hike.

The WTI crude oil price today dipped slightly in pre-market hours – falling 0.1% – despite a weakening dollar against its rivals. Meanwhile, Brent crude fell 0.1% in pre-market hours, despite news that Libya will delay a lot of crude oil shipments and investors anticipate a greater supply and demand balance heading into 2017.

Money Morning Global Energy Strategist Dr. Kent Moors has said that the biggest challenge for OPEC and non-OPEC producers will be the enforcement of its deal. But Dr. Moors appeared on CNBC over the weekend and projected that $65 per barrel is within reach. So, what is the secret source of energy profits for investors heading into 2017? Dr. Moors answered that very question last week. Read it, right here.

But the big story this morning is the financial and energy deregulation on tap in Washington, D.C., by President-elect Donald Trump. The 45th president – assuming electors confirm his victory Monday – campaigned on some different promises to reduce bureaucracy and red tape and help streamline the U.S. markets. Of course, given the number of players from the financial sector on his transition team and presidential cabinet, it's clear which sector will receive the attention first.

Money Morning Global Credit Strategist Shah Gilani has a message to Washington on how to address deregulation. Though Americans hate overregulation, the big banks remain very unpopular with Americans in the wake of commodity price fixing, the financial crisis, and the Wells Fargo & Co. (NYSE: WFC) account scandal. That is why Washington should follow this plan.