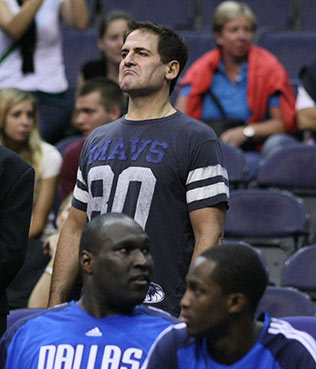 While on the campaign trail this past year, Trump repeatedly promised to spend upwards of $1 trillion on a variety of infrastructure projects, including roads, bridges, and airports, over the next decade.

But Cuban is advocating for at least $100 billion of those allotted funds to be invested in robotics.

"We need to help develop domestic companies much like we did the electric car and wind and solar industries," Cuban wrote on his blog on Sunday. "Even if it means trying to help pick winners. We have to win the robotics race. We are not even close right now."

The Dallas Mavericks owner went on to explain that many nations will "lose jobs to robotics" in the near future as automation continues to erode blue-collar work.

China's societal advancement over that of the United States…

"Why is this so important?" Cuban asked in his blog yesterday. "Because technological change always accelerates. It never stagnates over time. Which means we are going to face the fact that if nothing in the States changes, we will find ourselves dependent on other countries for almost everything that can and will be manufactured in a quickly approaching future."

Cuban went on to explain that, right now, the United States is far behind in the robotics race. Worse yet, none of the companies that actually make robotics are currently based here in America.

Cuban's sentiments echo those of analysts at global investment manager Bernstein, who stated on Dec. 5 that they believe the "age of industrialization is coming to an end," with robots set to destroy manufacturing jobs globally.

Bernstein analysts wrote that China is leading the way with robotics advancement, but that could easily change.

"The good news, if there is any, is that, according to the [Bernstein] report, China is only spending $3 billion a year on robotics," Cuban wrote. "We need to quickly pass them by."

So, the proposed $100 billion is definitely a start…

By now we've all seen the "Trump Tweet Effect" in full effect these past weeks, as the president-elect's unfiltered social media messages hit some of Wall Street's favorite stocks, like Boeing, for better… or worse.

The truth is, it's likely we can look forward to this kind of "volatility" from here on out.

Money Morning's Director of Tech & Venture Capital Research Michael A. Robinson knows just how to profit amid the coming tweet-storm…