(Kitco News) – Global markets were subdued overnight, on this week before the Christmas holiday. Trading in many markets is likely to get quieter as the week progresses. Many world stock markets are trading near multi-year and/or record highs and it would not be surprising to see those stock indexes at least pause, if not see some profit-taking, into the end of the year.

World bond markets were also quieter to start the trading week and may be stabilizing after several weeks of rising yields. The U.S. 10-year Treasury yield hit 2.6% late last week. After trading in negative territory just a few months ago, the German 10-year bond is fetching a yield of around 0.3%.

In overnight news, the German Ifo business sentiment index rose to 111.0 in December from 110.4 in October. The December reading was the highest since early 2014. The Euro zone third-quarter wage costs were reported up 1.6%, year-on-year, while labor costs were up 1.5% in the same period.

Fed Chair Janet Yellen's will deliver a commencement speech later today in Baltimore that may touch of the U.S. job market.

The key "outside markets" on Monday see the U.S. dollar index trading slightly lower on a corrective pullback after scoring solid gains and hitting a 13-year high late last week. Nymex crude oil prices are trading slightly higher. The oil bulls appear to be tired after spiking prices to a 16-month high last week. There are now technical clues the crude oil market has put in a near-term top. 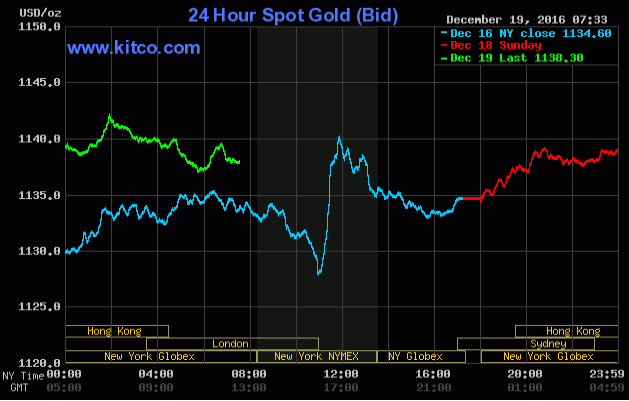