My colleagues have been busy making lists of "Donald Trump Stocks."

I've done some of that myself.

But maybe we should rethink that a little.

Trump has said he plans to act more like a chairman of the board, while Vice President-elect Mike Pence and the cabinet handle the nitty-gritty of government.

So maybe we should be talking about "Elaine Chao Stocks"...

After all, Trump's pick for secretary of transportation will head up much of the president-elect's $1 trillion infrastructure improvement plan. 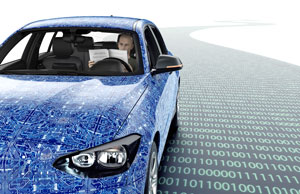 But more importantly to our interests here, she'll be in charge of regulating self-driving vehicle technology.

To us, that means public companies in the self-driving space are likely to see a big boost in share price over the next four years.

Especially the one we're looking at today.

You can already find its "pre"-autonomous driving technology in many of the most prestigious nameplates.

Its technology is the force behind two of the most "public" driverless car tests over the past couple of years.

And its shares are primed to soar as much as 40% in the next year alone.

Let's take a closer look at this "Elaine Chao Stock"...

Changing "How We (Don't) Work"

On the other hand, driverless vehicle technology goes against one of Trump's big promises - to create millions of more jobs.

That's almost 3% of the workforce, and they mostly belong to the same "cohort" as all those factory and fossil-fuel workers Trump is seeking to reemploy - men and women without college degrees.

In other words, self-driving technology is changing "How We Work" in the Singularity Era - by being one of the main reasons many may not be working in this brand-new era.

That presents a big problem politically and economically.

However, it's hard to believe proud capitalists like Trump and Chao would stand in the way of innovations that will increase the profits of tech shareholders like you. In fact, I fully expect the Chao team at the U.S. Department of Transportation to make the release of self-driving vehicles easier, if not a priority.

Now, I'm as concerned about the loss of those jobs as much as you are - it keeps me up at night, in fact. And, of course, I have opinions about what politicians and other leaders might or might not do to either stem the loss of these jobs - or create new ones.

However, my job here isn't to share my opinions.

It's simply to work with you to find the best tech profit opportunities out there. Today I'm doing so by following Rule No. 3 of my Tech Wealth Secrets: Ride the Unstoppable Trends. Driverless cars are certainly one of those.

I'm talking about the sort of tech profit opportunity with which you can turn $17,000 - the median savings of families close to retirement - into the sort of "nest egg" most people can only dream of.

And driverless technology and the company behind much of it - the one I'm sharing with you today - are just those sorts of opportunities.

If you still find the idea of self-driving cars hard to believe, consider this...

On that journey from San Francisco to New York, the car had to guide itself through big-city rush hours, road construction, confusing street signs, and diverse weather.

A human driver had to step in just twice on the trip. A few quick after-trip software fixes have been made, so the next cross-country trek could be truly 100% hands-free.

In other words, the car of tomorrow is here today, and we are at the dawn of a new technology that will shake up the $9 trillion global motor vehicle market and change the way the 80 million cars sold each year operate.

This extremely safe technology should make a huge dent in auto accidents, which kill 32,000 people every year just in the United States.

And Boston Consulting Group predicts that autonomous cars will create a market for the technology that goes from about $0 today... to $42 billion by 2025... to $77 billion by 2035.

Going Behind the Scenes