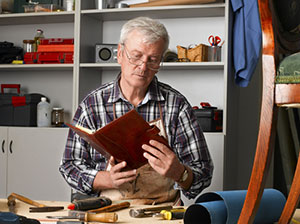 Waiting until 65 to retire is long enough.

Now Washington has proposed an even later retirement age in the U.S. – and it could mean you're working much longer than you had planned…

The new plan could mean you have to work until you're 69 years old.

You see, Social Security benefits are being depleted. By 2034, the Social Security Board of Trustees warns workers could face a 21% cut to their benefits if Congress doesn't reform the program.

So in order to fix that, this Congressman has a bold plan…

New Proposed Retirement Age Means Working Longer Than Ever Before

"This legislation, the Social Security Reform Act of 2016 (H.R. 6489), puts Social Security back on a sustainable path by modernizing the program for the 21st century, rewarding retirees and individuals with disabilities for their years of work, and improving retirement security," Johnson said on Dec. 16 on TexasGOPVote.com.

Johnson said that benefits would be increased for lower income workers while slowing the growth of benefits for higher income workers. He also said that his proposal will use a more accurate measure of inflation to make sure benefits keep up with changes in the economy.

The congressman also wants to encourage more saving for retirement. He wants to phase out Social Security's tax on benefits for workers who receive income after they retire or stop working due to a disability.

Johnson's plan would also limit the size of benefits for spouses and children of high-income earners. That would help provide more benefits for those who are most in need, according to Johnson.

Johnson's proposed bill would affect those born in or after 1968, and gradually increase the retirement age to 69.

The new retirement age would better reflect American's longer life expectancies, according to the bill's summary.

According to USA Today, the average retirement age in the United States is 63.

As you can see in the chart below, retirement benefits are reduced significantly if you retire by age 62. 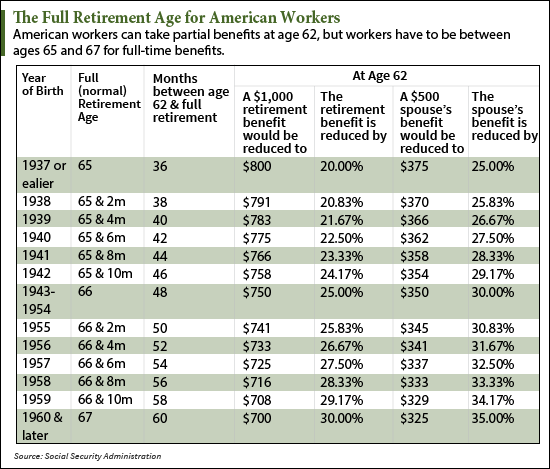 Individuals born in 1937 or earlier would have to retire at age 65 to receive full benefits.

While hardly anyone wants to work into their late 60s, a number of factors have led to a rising retirement age in the United States – putting people born today on track to be working into their 70s…

Social Security was designed to only replace roughly 40% of pre-retirement wages, but that percentage will drop in the future. According to a 2015 Social Security Administration report, only 73% of benefits will be able to be paid out by 2089.

Receiving Social Security benefits will be far from guaranteed. People born today will have to work longer because they'll need to rely more on their own savings for retirement.

And there's one big reason the U.S. retirement age will only continue to climb…

Why the U.S. Retirement Age Will Keep Climbing

Because of inflation, retirees not saving enough throughout their lifetimes, and Social Security being depleted, current U.S. workers are already on track to work longer than ever before.

Part of the reason baby boomers and younger workers are planning to work longer is the fallout from the 2008 and 2009 financial crisis.

According to PBS, retirement accounts lost $3.4 trillion during the financial crisis. The unemployment rate peaked in October 2009 to 10.1%, which means roughly 12.5 million people were out of work and not contributing to a retirement plan.

The crisis also put a strain on hiring, leaving millions of millennials unemployed or underemployed. Roughly 40% of individuals unemployed in the United States were millennials as of December 2015, according to CNBC.

Years of unemployment or underemployment will force millennials to work longer to fund their retirements.

However, the biggest reason the retirement age will continue to climb is an increase in life expectancy.

That's a big difference from when FDR signed the Social Security Act in 1935. At the time, the average life expectancy rate for males was 59.9 years and was 63.9 years for females. Workers during that time needed less money because they were expected to live shorter lives.

According to ABC News, the life expectancy for men by 2050 will be between 83 years and 85 years. Women are projected to live between 89 and 94 years.

And that's just the average. Some retirees will need 30 or more years of retirement funds to live off of by 2050.

Retiring without full benefits is only part of the problem for millions of Americans. You see, there's also a government plan scheduled to go into place as soon as April that could change your plans for retirement.

You see, under the watchful eye of Congress, the government will soon be implementing a controversial plan that threatens the retirement of millions of Americans. And they're using an obscure loophole buried in Title 29 of the U.S. Labor Code to do it. If you have a 401(k), IRA, or any type of retirement account, this could cause you to miss out on $68,870 or more. Full Story