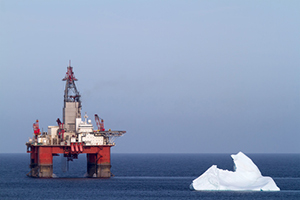 President Obama's permanent drilling ban off the Atlantic and Alaskan coasts is a blow to American drillers, just as oil and gas prices are starting to rise.

Yesterday (Tuesday, Dec. 20), the president announced a permanent drilling ban off American coasts. The permanent ban extends from the coast of Virginia up to the coast of Maine. Obama's edict also bans drilling off the Alaskan coast into Arctic waters.

Obama's drilling ban does not add to the existing ban at the Alaskan National Wildlife Refuge (ANWR). But the new Arctic drilling ban could prove just as controversial as the ANWR ban.

President Obama's permanent drilling ban couldn't come at a worse time for American oil and gas companies. And his decision is unprecedented, too...

President Obama said a law passed in 1953 allows him to permanently ban drilling in coastal waters.

The Outer Continental Shelf Lands Act, passed in 1953, allows the secretary of the interior to grant leases for oil and gas exploration.

But President Obama says it gives him the power to ban oil and gas drilling, too. President Obama issued a "presidential memorandum" rather than an executive order to ban drilling. The decision will almost certainly be challenged in court.

The White House announced the permanent drilling ban Tuesday through a joint statement with the Prime Minister of Canada, Justin Trudeau. Trudeau is a member of Canada's Liberal Party.

Canada is also going to ban drilling off its Arctic coast. Between the U.S. and Canadian bans, there will be no oil and gas drilling in Arctic waters east of Russia.

The joint statement comes exactly one month before Donald Trump will be sworn in as the next U.S. president. And Obama's timing is not a coincidence.

President-elect Trump has also said he will "cancel" the Paris climate agreement the United States is party to. Trump previously claimed climate change is a hoax created by the Chinese government.

Oil and gas prices are on the rise, and that means Obama's Arctic drilling ban will hurt American companies trying to take advantage of the higher prices.

Oil prices have risen by 11% since the OPEC agreement, making American oil exports more profitable. Natural gas prices have also been surging as 2016 ends. Natural gas has rallied by 121% since hitting its 2016 low in March.

With higher prices, American companies are able to make more money. It also means more exploration and drilling is worthwhile.

The Baker Hughes rig count is up by 2% in December, as the United States added 13 rigs. Higher oil prices have encouraged more American drilling.

But, with the new ban in place, American companies are left out of the price boon.

Even though 2017 is set to be a big year for oil and gas prices, Obama's drilling ban will only add to the industry's uncertainty. But Money Morning Global Energy Strategist Dr. Kent Moors says big changes can lead to big profits for your energy investments. Here's how Moors finds a new source of energy profits in 2017...

Ground airforce one and cut off the heat to the white-house for the remainder of his term.