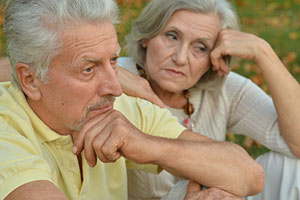 A 60-year-old should have eight times their annual salary in savings to retire comfortably, according to Fidelity. But baby boomers simply aren't saving for retirement.

But according to a BlackRock survey, the average pre-retirement baby boomer (ages 55-65) only has $136,200 saved for retirement.

Even more shocking, 55% of adults over the age of 55 claimed to have no retirement savings, according to a GoBankingRates research study.

How did this happen?

There are a few explanations...

Why Boomers Don't Have Enough Money to Retire

First, many baby boomers don't have enough money for retirement because they've lost a lot of the money they would have saved.

During the dot-com bubble of 2000, the Nasdaq lost nearly $1 trillion in value from March 2000 to April 2000, according to Time. The financial crisis of 2008 and 2009 also wreaked havoc on retirement savings and wealth.

Retirement accounts lost $3.4 trillion during the financial crisis, according to PBS.

The second reason baby boomers don't have enough for retirement is many weren't able to grow their money.

Because of the dot-com bubble and financial crisis, some baby boomers were afraid to play the stock market. And that means many missed out on stock market rebounds.

But investors who stayed in the market and bought stocks when prices were low have made massive returns. Today, the Dow opened at 19,968.97. That's a potential profit of 195% for an investor who invested in an index fund that tracks the Dow.

The third reason is near-zero interest rates from banks made it much more difficult for baby boomers to grow their money before retirement. In 2003, you would have been considered lucky to earn 1% compared to today.

But it was only designed to supplement roughly 40% of pre-retirement wages.

But the average life expectancy today for females is 81.6 years and 76.9 years for males. Retirees are living longer and will need more money than previous generations after they stop working.

Social Security alone won't be enough to cover medical bills and the rising price of goods under inflation.

And not only will Social Security not be enough, but there will be even less of it to supplement retirement plans...

That's why we want to show Money Morning readers one "secret" to beat the system as you plan your retirement...

There's an obscure clause in the U.S. Labor Code that could rob Americans of justified profits.

This could cause a retirement blackout in 2017 and beyond. But there are little-known investment havens, like the 26(f) program, that give investors the opportunity to earn impressive monthly income on top of lump-sum payouts.

Programs like 26(f) have been a well-kept "secret" of powerful government officials and politicians.

And the best part of 26(f) programs is they allow people to "enroll" with just a small investment stake...

Money Morning Chief Investment Strategist Keith Fitz-Gerald has been following this government scheme for years. Fitz-Gerald is a seasoned market analyst and professional trader with over 34 years of global experience - and he hates to see investors miss out on an opportunity. Even more, he hates to see the government profit at your expense.

Fitz-Gerald has developed a short presentation that will show you how to take advantage of these 26(f) programs right now - exclusively for Money Morning readers. Click here to learn how to receive your free report.

Please add me to your newsletter.