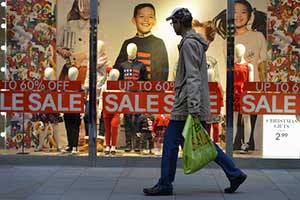 Now, here's a look at today's most important market events and stocks, plus a preview of Tuesday's economic calendar. (U.S. markets will be closed on Monday, Dec. 26, in observance of the Christmas holiday.)

The Dow Jones dipped 10 points in a light day of trading. The CBOE Volatility Index (VIX) - the market's fear gauge - added 1.6% and traded near 11.6 in afternoon trading. Despite the flat day for stocks and lack of earnings reports, it was a busy day of economic data.

Meanwhile, retail stocks were mixed despite news that U.S. consumer sentiment in November hit its highest level since January 2004. According to the University of Michigan, the monthly reading for the consumer sentiment index ticked up from 98 in October to 98.2 in November. The uptick was fueled by the election of President-elect Trump and increasing optimism about the U.S. economy heading into 2017.

Money Morning Global Energy Strategist Dr. Kent Moors has spent the last two weeks of 2016 putting together his 2017 oil forecast for our readers. Last year at this time, he set predictions for December 2016 for both WTI crude and Brent crude. Sure enough, both types of oil are trading in the range he projected. Now, he's setting his price targets for the year ahead and helping readers understand the biggest trends that will impact crude in the months ahead.

Gold prices were ticking a bit higher despite the recent downturn fueled by an interest rate hike by the U.S. Federal Reserve. The price of gold today is up slightly 0.27%, and it is still trading near $1,133. Money Morning Resource Specialist Peter Krauth breaks down the price of gold in the months ahead and set an aggressive price target for the road ahead. Here's his latest insight.

But the big story today is news that the U.S. Justice Department has reached multibillion-dollar settlements with Deutsche Bank AG (USA) (NYSE: DB) and Credit Suisse Group Inc. (NYSE: CS). The two European banks have settled charges that they deceived investors on the quality of mortgage-backed securities in the run up to the financial crisis. Credit Suisse will pay $5.3 billion, while Deutsche Bank plans to pay $7.2 billion.

The announcement comes a day after the Department of Justice formally sued Barclays Plc. (NYSE ADR: BCS) over similar allegations. The British bank has vowed to fight the U.S. agency's allegations traced to $31 billion in loans from 2005 to 2007.

On Monday, Dec. 26, the markets will be closed in observance of the Christmas holiday. Markets will reopen on Tuesday, Dec. 27, at regular market hours.