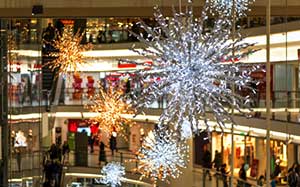 The Dow Jones Industrial Average was flat during the final trading day before the Christmas holiday. Many pundits expect Friday to feature light trading volumes and little volatility.

However, there could be a few surprises, as two important economic reports will be released later this morning.

On Thursday, the Dow slipped 23 points as consumer stocks dipped thanks to a round of lackluster earnings reports. The downturn occurred even though the U.S. Commerce Department reported that third-quarter GDP increased by 3.5% and that the number of Americans seeking unemployment benefits was hovering near a 43-year low.

First up, keep an eye on November home sales. A positive report will likely have a positive impact on construction firms like KB Home (NYSE: KBH), Lennar Corp. (NYSE: LEN), and Toll Brothers Inc. (NYSE: TOL). On Thursday, these companies all fell sharply.

Next up, the markets will be paying attention to the December consumer sentiment report. Since the election, consumer optimism has surged thanks to improving outlooks on the U.S. economy and job market. The monthly report is especially important to retailers who are looking for clues into the willingness of customers to spend money during the holiday shopping season. Keep an eye on big retailers like Macy's Inc. (NYSE: M) and JCPenney Co. Inc. (NYSE: JCP), which both saw a steep downturn in their stock on Thursday.

Crude oil prices were pushing lower on news that Libya has increased its production plans. The nation announced its intention to hike its crude output by roughly 270,000 barrels per day (bpd). Also weighing on crude prices was the news that U.S. inventory levels surprisingly increased last week, according to the Energy Information Administration's weekly report.

And he's identified one company poised to profit from this ongoing conspiracy.

But the big news today is the announcement that President-elect Donald Trump has nominated Peter Navarro to head the White House National Trade Council.

Navarro is a professor of economics and public policy at the Paul Merage School of Business, University of California, Irvine. He is also an outspoken critic of China's trade policies and author of a book on the country's impact on the U.S. economy called "Death by China."

The decision is seen as an effort by Trump to double-down on the hard talk about China's currency devaluation, its growing trade balance against the United States, and its shaky trade relationship with the United States. Some are worried Trump's policies - which include proposals for tariffs on Chinese goods - could spark a trade war between the world's two largest economies.

Act Now: How to Grab Explosive Emerging-Market Profits and Keep Your Money Here at Home

Finally, check your calendar. On Monday, Dec. 26, the markets will be closed in observance of the Christmas holiday. Markets will reopen on Tuesday, Dec. 27, at regular market hours.