Last week I told you how the recent silver price action had become pretty negative. That's continuing as the price of silver today (Friday) is down another 0.4% to $15.78 in afternoon trading.

Since then, silver prices have weakened a little more but could well be stabilizing and working through a bottoming process.

On a year-to-date basis, silver has still outperformed gold. So far, silver is ahead about 15% in 2016, while gold is up about 7%. That's the typical two-for-one leverage that you expect from this metal. 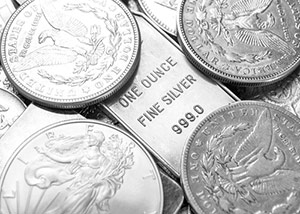 And interestingly, since silver's correction began in early August, the two metals are both down about 14%. So despite its higher volatility, silver is providing great upside leverage, while providing no downside leverage compared to gold.

That in itself is a pretty compelling argument for owning silver. But there are others.

Like gold, silver's been beaten up technically. Yet the contrarian view suggests we could be near or at a point of maximum pessimism, making silver an attractive asset to buy at current levels.

Has silver bottomed? We can't know for sure. But the indicators are leaning that way. And buying at current prices makes for a much lower-risk entry point than just a few months ago.

The price of silver started out the past trading week with a negative bias. It opened on Monday, Dec. 19, at $16.02, but fell on balance through the day to end at $15.95, below the psychologically important $16 level.

Wednesday, the silver price opened at $16.02, but fell on balance through the day as sellers dominated. The metal's price dropped to close at $15.89.

And on Friday, silver opened only slightly higher at $15.78, but continued to weaken slightly. Despite a mostly flat DXY and a stronger gold price, the price of silver today was only slightly lower at $15.72 by midday.

Now that we've looked at the past week, what can we look forward to on the silver front in 2017?

What's Next for Silver Prices in 2017