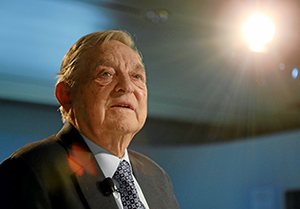 Hedge-fund billionaire George Soros warned that the European Union is on the brink of democratic collapse. His caution came via a Project Syndicate op-ed on Wednesday (Dec. 28) and claimed the union's downfall will ultimately destroy U.S. democracy in the process.

Soros pointed to lagging economic growth in the EU and the growing refugee crisis overseas as specific catalysts for his dire prediction. These issues make the EU vulnerable to Russian President Vladimir Putin's influence.

For example, Soros claimed in his article that the recent development of anti-EU movements, such as Brexit, were in part orchestrated by Putin himself. "Putin is not a passive beneficiary of recent developments; he worked hard to bring [events like Brexit] about," he claimed.

Soros further backed up his assertion by stating Putin's "concept of government is irreconcilable with that of open society - in which people elect their leaders who are then supposed to look after the interests of the electorate."

The 86-year-old Hungarian-born activist investor pointed to his formative years in areas ruled by either Nazi or Soviet regimes as proof for how destructive such governments can be.

This is why he's now so pre-occupied with Putin's recent alleged global manipulation.

"Open societies are in crisis, and various forms of closed societies - from Fascist dictatorships to mafia states - are on the rise," Soros wrote.

Here's what he is predicting will happen should the EU become vulnerable to Putin's influence...

How Putin Will Rule the EU

According to Soros, the impending 2017 elections in the Netherlands, Germany, and Italy will likely see the same kind of corruption and misguidance from the Russian president that America arguably did during the 2016 presidential election

Remember, Putin has been fingered by both the FBI and President Barack Obama as the culprit responsible for the spread of various false news stories promoting scandals. These stories may have helped Trump win the election.

Soros sees this playing out across the Atlantic all over again...

"In France," Soros explained, "the two leading contenders are close to Putin and eager to appease him."

On top of that, Russian state-backed non-governmental organizations (NGOs) and think tanks backed by the Kremlin are operating in the EU with the aim of shifting European public opinion towards a positive view of Russian politics and policies, according to Express UK on Aug. 17.

This is how Putin is attempting to infiltrate democratic societies, the media outlet stated - by promoting anti-democratic principles alongside a narrative that the United States is a common enemy for both Russia and the European Union.

This kind of manipulation from Putin will, once again, swing back to trip the U.S. up, claimed Soros...

Just like it purportedly did in the months leading up to Nov. 8...

Soros expects the United States to become a sort of "closed regime" where the "rulers seek to manipulate their subjects to serve the rulers' interests" under a President Donald Trump.

"Trump will prefer making deals to defending principles," Soros claimed - an administrative preference that Putin has exhibited many times before.

For example, in October Putin struck a deal with Russian-owned oil company Rosneft to sell the government's stake in Russian oil firm Bashneft. Putin hailed the deal as a milestone in the privatization drive of the country, though how it benefitted Russian citizens at all was never fully realized or explained. According to CNBC on Oct. 13, many questioned if the deal was even "real privatization," given that Rosneft was backed by the Kremlin anyway.

Mirroring such confusing corporate deals could easily happen in the U.S. at the behest of Trump, Soros suggested, which may threaten the democratic ideologies America stands on.

"Trump will have a greater affinity with dictators. That will allow some of them to reach an accommodation with the U.S, and others to carry on without interference," warned Soros. "Carry on" meaning acting expressly against - or perhaps even negatively toward - the will of their constituents.

Already, Soros believes, we're seeing the trappings of such behavior with Trump's decision to "comprise his cabinet with incompetent extremists and retired generals."

Warren Buffet Is Now $12.3 Billion Richer Thanks to Donald Trump