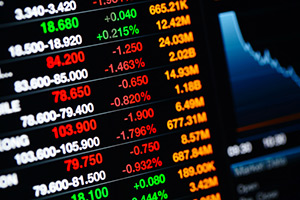 The Dow Jones Industrial Average is surging in premarket trading on Tuesday as investors aim to start 2017 with a triple-digit bang.

Dow futures have pushed the index back into striking distance of 20,000. Oil prices were rallying thanks to increased confidence that OPEC producers will cap excessive supply on the global markets. On the international front, markets were also rallying thanks to improvements in China's manufacturing sector.

On Friday, the Dow shed 57 points as a brief sell-off rattled the markets in the closing days of 2016. Investors may have been selling stocks to reap the benefits of tax harvesting after a huge post-election rally.

The Dow projected a 132-point gain thanks to a big jump in crude oil prices. In addition, the banking sector continues to rally on increased optimism of a hawkish Federal Reserve and a business-friendly President-elect Donald Trump. This morning, shares of Bank of America (NYSE: BAC), JPMorgan Chase (NYSE: JPM), Goldman Sachs Group (NYSE: GS) and Wells Fargo & Co. (NYSE: WFC) were all up at least 1% after the companies received upgraded price targets from Barclays Plc (NYSE: BCS).

Investors were cheering a big rise in the Chinese manufacturing sector. The China Caixin manufacturing purchasing managers' index increased from 50.9 in November to 51.9 in December. That is the largest jump in the index since January 2013 and has investors and analysts optimistic that China's economy is pulling itself out of a lull.

Crude oil prices were surging this morning to an 18-month high after OPEC and non-OPEC producers coordinated to cut excessive production. One month after the global oil cartel agreed to cap production levels, the nations are on the verge of dramatically reducing oversupply. OPEC and 11 non-OPEC nations agreed to cut production by 1.8 million barrels per day (bpd).

But the big news today is Bitcoin...

The electronic currency has been on a huge tear over the last year and breached the $1,000.00 mark on Monday. That is the highest level for Bitcoin in more than three years. In fact, in 2016, Bitcoin was one of the top investments and trailed only two stocks on the S&P 500.