Every new year is ripe with promise, and 2017 seems to hold more promise than most - at least for some people.

But I've got a few simple ideas that could make it a great year - many great years - for all of us.

And I mean one of the best, most prosperous years in American history...

We Won't Get Anywhere with the Same-Old, Same-Old 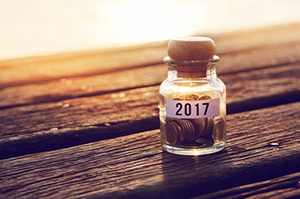 If it seems like most of America has been, well, down in the dumps psychologically (and financially) since the 2008 credit crisis and Great Recession, there's a good reason.

For lots of people, not much seems to have changed for the better.

Sure, if you're a One-Percenter, your wealth has significantly increased because you not only had money in the market and stayed in it after the crash, but you also probably bought more stocks as the market kept going up.

And with interest rates so low for so long, if you had good credit, it was easy to borrow to buy more financial assets. And those assets kept going up and up, because companies could borrow cheaply to buy back their own shares as never before.

That made management rich, along with shareholders, but it didn't do a damn bit of good for hundreds of millions of Americans.

Those Americans got crushed, almost to death; the cheap-as-free cash that made some even wealthier ruined millions of savers, who barely earned a cent on their savings. What's more, plenty of people who got sucked out by the 2008 crash didn't get back in.

One reason, besides fear, was that aging Baby Boomers were following Outdated Financial Lesson No. 1: As you get older, you shift out of more risky equities and move your portfolio into fixed income, so you can live out your life knowing just what your retirement income will be and you won't be exposed to

Did you send these ideas to Trump? Also I think we need to do away with o'bummercare. I'm on a fixed income. Retired. The cheapest plan I qualified for was going to cost me one fourth of my GROSS income. $7500.00 deductible and only paid 80% after deductible was met. People can't afford that. We're being ripped off.

Yes, do away with the federal reserve and why not the IRS while were at it. All we need is sales tax. The country existed for more than 100 years without the IRS. They have been stealing your money & your freedom since they were created. Of course, it would take nothing less than a revolution to do it. Who,s game????

Your solutions are all addressed with the FAIRtax bill HR 25. FAIRtax® is America’s Big Solution to the many problems with the federal tax code. We want and need a long term solution and are tired of short term tax changes that don’t fix anything. Replace the old tax system to eliminate annual filing, taxes on jobs, tax withholding and the IRS. Move the tax base from income, savings and investment to one tax on consumption with only one tax break that helps most the impoverished and lower income and makes the FAIRtax a progressive tax system. Learn more, join the tax reform cause and contribute at fairtax.org and bigsolution.org