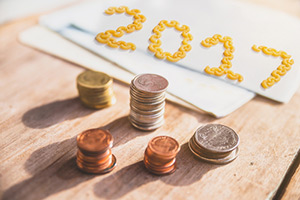 You see, the decline in gold prices over the last three months is only a short-term reaction caused by two temporary factors...

The first is the U.S. dollar, which is up 5.8% since the presidential election and 2.2% since the December interest rate hike. A stronger dollar lowers the price of gold because gold becomes more expensive in foreign currencies.

The second headwind is news of India potentially limiting its gold imports. As one of the world's largest gold consumers, India's new policy would drastically reduce global demand. While the policy could benefit silver prices, it would drag gold prices lower.

Don't Miss This: Why Gold Is the Best Investment Right Now

Despite these headwinds, one of our gold price predictions sees the metal rebounding through 2017.

According to Krauth's newest gold price prediction, the metal will rise at least 24% to $1,400 an ounce by June 2017 at the earliest. He expects Donald Trump's economic plan to stoke interest in gold investments throughout the year.

"With a new president bent on stimulating the economy through tax cuts and massive spending, along with a number of overbought markets, 2017 could turn out to be a strong year for gold," Krauth told Money Morning readers on Dec. 23. 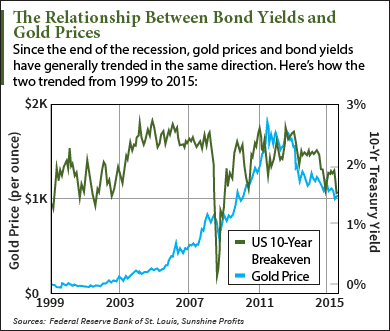 At this pace, inflation will easily outpace current short-term interest rates of 0.5%. The latest data from November shows the inflation rate at 1.69%. Since gold is considered a safe-haven investment, gold demand will rise as investors try to protect their money from the effects of inflation.

"As we see inflation ramp higher, that mindset settles in and people start thinking overnight that we're in an upward inflation cycle," Krauth explained. "I expect we could see $1,400 gold in the latter part of next year."

But this is just one of our gold price predictions...

In fact, our second gold price prediction is looking farther into the future and has a much higher price target.

Here's why gold prices will more than quadruple from current prices over the next four years...

You see, despite recent declines, gold prices are in a bull market. Once they hit a five-year low of $1,056 in November 2015, prices rebounded 23% the following year. Even if the gold price moves lower in early 2017, it won't be enough to end the current bull market. 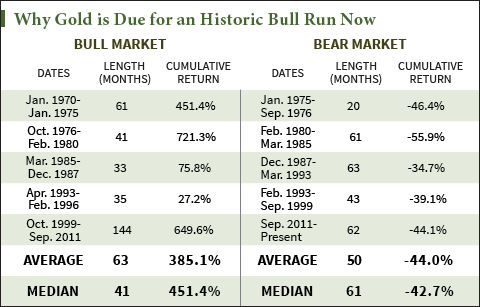 The Bottom Line: Despite last quarter's 12.1% decline, our short-term and long-term gold price predictions show handsome gains. We see gold prices surging 24% to $1,400 an ounce by the second half of 2017 as Trump's economic policies take shape and inflation rises. Beyond 2017, we project the price of gold to soar 451.4% to $5,246 by the start of 2019. That's because gold bull markets have historically seen more than quadruple returns.

I want to be a stock market millionaire

If there is a crash there is not cash.
How can you take profit by selling our gold?

In every crash there is cash. For every "sell" in the stock market there is a "buy" at any price, unless the market has no depth at all. In WW2, in occupied Europe and in particular Greece that faced money oversupply and hyperinflation, those with golden coins survived famine and misfortune. Somebody bought their gold and somebody sold them commodities for their gold. The rest of money was unreliable.

I believe you meant gold coins, not golden coins. Gold is the actual metal. Golden might be a color. Sometimes our fingers don't write what our brain is saying. And then there's spellcheck….

Gold is a good use in Jaheem's book.