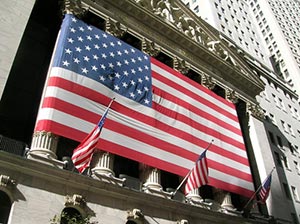 The big banks are gearing up for a challenge in Washington over the Volcker Rule.

This particular legislation, part of the Dodd-Frank Act of 2010, restricts U.S. banks from making certain kinds of speculative investments that might not benefit their customers. Dodd-Frank was enacted in the wake of the 2008 financial crisis. Volcker, as part of it, was ratified to eliminate the effects of risky proprietary trading and hedge fund ownership by big banks on everyday investors.

It's important to understand the basics of "proprietary trading" to fully grasp what lobbyists are hoping Washington will do in the near future. Proprietary trading occurs when a broker trades stocks, bonds, currencies, commodities, or other financial instruments with a firm's own money to make a profit for the establishment itself. Such speculative trading, in large part, led to the 2008 stock market crash, particularly with mortgage-backed securities owned by big banks.

The Volcker Rule led to an exodus of top proprietary traders from large banks to form their own hedge funds or to join existing hedge funds so they could continue trading as usual.

But now big bank lobbyists hope the new GOP-led Congress will loosen or even eliminate this loathed Dodd-Frank provision.

Doing so would allow these institutions to again practice proprietary trading on the banks' own accounts. And hedge fund bankers would, presumably, once again join these banks' ranks where they'd make profitable, albeit once-again risky trades.

Whether or not the lobbyists will see the provision's death all the way through isn't known just yet, but they are purportedly hoping for even the smallest changes, reported Reuters earlier today.

Here's what could happen in the months and years to come...

The Volcker Rule Will More Likely Be "Rolled Back"

President Barack Obama's administration regulators and enforcement agencies have been tough on big banks since the Great Recession. Anti-regulatory/anti-Volcker Rule lobbyists in the years since Dodd-Frank's ratification have seen their efforts fall on deaf ears.

But now a GOP Congress is in charge, and these lobbyists are realizing new opportunities to unravel reforms under President-elect Donald Trump, who officially assumes the presidency on Jan. 20.

Trump himself called for scrapping Dodd-Frank a number of times during his presidential campaign. The Trump transition team's official website has some fiery words promoting the legislation's ultimate demise as well:

"The Financial Services Policy Implementation team will be working to dismantle the Dodd-Frank Act and replace it with new policies to encourage economic growth and job creation."

While an outright repeal of the Volcker rule is not expected to happen right away (or any time soon, given the partisan fight it will surely face in Washington), any "small but meaningful change" could prove fruitful for lobbyists.

"I don't think there will be a big, ambitious rollback," said one big-bank lobbyist who was not authorized to discuss strategy publicly, reported Reuters today. "There will be four years of regulatory evolution."

For example, a simple reversal of the rule's language would be considered a big win. Big banks currently are asking for clarification on the language within Volcker's provision that specifically instructs them to hold only enough securities to satisfy "reasonably expected near-term demand" from customers.

Furthermore, bankers are seeking to challenge the widely held belief by financial industry and government watchdogs that proprietary trading had so much to do with the root causes of the 2008 crisis. They say Volcker is inherently flawed because it can be challenging to tell whether a trader is speculating or simply fulfilling customer demand.

Ultimately, changing the rule through Congress would require 60 votes in the Senate, including support from at least eight Democrats. Lobbyists say they intend to court business-friendly Democrats right away.

Meanwhile, industry watchdogs are on guard.

"Wall Street is salivating at their reversal of fortune," Dennis Kelleher, CEO of Better Markets, a non-profit, non-partisan, and independent organization formed in the wake of the Great Recession, told Reuters today. Better Markets actually pushes for tighter financial regulation.

"If you get to keep profits and stick taxpayers with the losses, why not?" Kelleher argued.

Money Morning's Capital Wave Strategist Shah Gilani, who spent three decades in the hedge fund industry, thinks Washington lawmakers should go ahead with financial deregulation... so long as they're super smart about it.

"Fair and smart means: Don't let banks... polluters... or anyone who would gladly compromise America for self-interest and greed run wild," Gilani explains.

Here's a look at why Gilani thinks new financial regulations should be simple for everyone to understand.