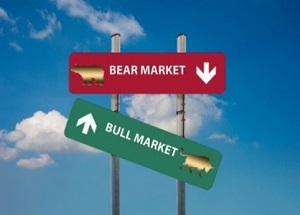 The Dow Jones Industrial Average today climbed higher and put the index within 100 points of 20,000.

The uptick came after the Federal Reserve released the minutes from its December meeting.

The report indicates that the central bank raised rates as a direct response to Trump's incoming tax policies.

The Nasdaq and the S&P 500 pushed into record territory thanks to a strong boost in the biotech sector. Shares of Gilead Sciences (Nasdaq: GILD) added the biggest bump to both indices after the firm announced the hiring of a new oncology chief.

The GILD stock price climbed more than 3.5% on the day.

With the markets trading near historic levels at the start of 2017, investors are looking for the best investments when the market is high. Here's our list of the five stocks to buy, right now.

DJIA Today: Dow Back Within Striking Distance of 20,000

The Fed has forecasted at least three interest rate hikes this year. According to the Fed minutes released today, the central bank increased its benchmark rate in response to the market reactions to President-elect Donald Trump and his planned fiscal policies.

It was a big day for automotive stocks. Shares of General Motors Co. (NYSE: GM) and Ford Motor Co. (NYSE: F) rallied more than 4.5% after both firms reported strong domestic sales in December.

Crude oil prices were rebounding from a two-week low thanks to an expected increase in U.S. crude inventories. The WTI crude oil price today added 1.7% as traders await the release of the weekly crude report from the Energy Information Administration. Analysts project that U.S. inventories will decline by 1.7 million barrels.

Brent crude gained 1.6% on increased optimism that that OPEC members and non-OPEC nations will cut excessive crude oil production. This morning, Kuwaiti officials said they will cut 131,000 barrels per day. All eyes are on the next OPEC meeting set for Jan. 21 in Vienna, Austria.

Oil investors are also waiting for the Saudi Aramco IPO date. Though it hasn't been confirmed, the deal is expected to launch in 2018. This would instantly create the world's largest public company and may set a market capitalization above $2 trillion. But there are three obstacles that could hold this deal back. Read about them, right here.

But the big story today is the Affordable Healthcare Act. With the Trump administration just weeks away from entering the White House, Republicans are aiming to fulfill a campaign promise to repeal and replace the healthcare law.

On Wednesday, Congressional Democrats went on the attack, accusing President-elect Trump of making American sick again. During a press conference in Washington, Senate Minority Leader Charles Schumer (D-NY) said Republicans have no idea what to do about healthcare.