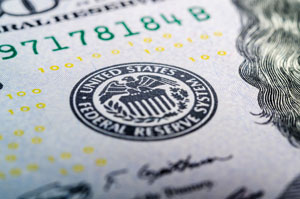 The Dow Jones Industrial Average today is back within striking distance of 20,000 as investors prepare for the release of the minutes from the Fed Open Market Committee's meeting in December.

Investors will be looking for clues into the timing of the next interest rate hike by the U.S. central bank. The markets are also interested to see what the members of the Federal Reserve have to say about the incoming Trump administration and its planned fiscal policies.

On Tuesday, the Dow gained 119 points thanks to a strong uptick in telecom stocks. Shares of Verizon Communications Inc. (NYSE: VZ) offered the biggest boost to the index. The U.S. dollar hit a 14-year high after another round of strong economic data. The Dow came within 60 points of the psychological barrier of 20,000 but fell short after a surprise sell-off in crude oil.

The Dow Jones industrial average projected a 32-point gain ahead of a very busy day of economic news. In addition to the release of minutes from the Federal Reserve, investors will digest the weekly update on Americans seeking unemployment benefits during the final week of 2016. The report will be a preview of Friday's release of the official December unemployment rate by the U.S. Labor Department.

Crude oil prices were back on the rise Wednesday thanks to an expected decline in domestic inventory levels. The Energy Information Administration doesn't report the official inventory levels until Thursday, but analysts are expecting a decline of 1.7 million barrels.

Meanwhile, Brent crude added roughly 0.7% as traders eye the ongoing deal among OPEC producers to cap excessive supply. On Wednesday morning, Kuwait raised its expectations that OPEC and 11 non-member nations will comply with the deal.

But the big story is President-elect Donald Trump's ongoing efforts to fill his cabinet and key agency roles within the administration. The Wall Street Journal speculates that Jay Clayton is the early favorite to assume the top role of the Securities and Exchange Commission.

Clayton is a partner at law firm Sullivan & Cromwell. He has specialized in mergers and public and private offerings during his decades of experience.