Turns out, my seatmate on a flight home last week is not only an avid reader of our work here, but also a huge "Varney & Co." fan and recognized me when we sat down next to each other.

We proceeded to have a terrific and very exciting conversation about the markets in general as we settled in for the nearly six-hour flight. Then, he asked the one question I couldn't resist answering any more than I could wait to share with you...

"Gimme five of the most outrageous opportunities you're tracking in 2017."

Here's what I shared with Roger.

Why a Plan Is So Important 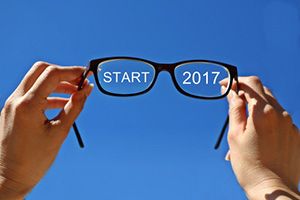 That means having a rough idea of where you're going and why. The vast majority of investors never bother, which is why they have trouble turning great ideas into cold, hard cash.

For example, millions of investors bet the wrong way headed into the elections and got caught flat-footed when Trump won. They simply couldn't see the alternative, let alone position their money for the possibility. Now they're in the unenviable position of having to play catch-up, which means there's an estimated $2 trillion - perhaps even $3 trillion - on the sidelines.

At the same time, central bankers around the world refuse to give up the proverbial ghost. Despite a mountain of evidence that their policies don't work, they're still in an "accommodative" mood. That means free money for the masses, or at least damn cheap money and upward price pressure on the markets.

Plus, even if Yellen puts in all three of the planned increases she's talked about for 2017, the Fed Funds rate will still be a staggering 66% below its historic average. What's more, it'll still be the slowest interest rate normalization on record.

I think that's good for between $500 billion and possibly even $1 trillion over the next 12 months coming directly into the markets, and all of that has to go to work somewhere. What that means is that you're going to have a lot of money chasing relatively few quality stocks. So you want to own the "quality" stuff they'll be after.

The situation reminds me of the 1950s when markets enjoyed a decade-long run.

I know this is counter-intuitive. The "Legion of Doom" - that's what I call the perma-bears who have been as wrong as the day has been long since 2009 - can't grasp this.

Think about it this way, I urged Roger.

And, finally, the market has pivoted. Four decades of terrible fiscal policy have come home to roost, and millions of investors are angry as hell. That's why populism is sweeping our planet and smart politicians are now building on hope rather than punitive financial policy.

President-elect Trump is a good example of this. Love him or hate him, he's proposed spending programs that I think could be worth $250 to $500 billion to the right companies.

In a word... outrageous opportunity.

Here's my thinking as it relates to five of the most outrageous opportunities I'm watching in 2017.

How will Watt overcome trends of Gov mandated safey and efficiency ?

For many years I have hated this whole central bank setup, and I think we should get rid of them, and allow the market to set interest rates, etc., and return to a more libertarian setup. But there is a problem. Any change must be done gradually and in "baby steps" or else we will have to endure a prolonged period of chaos just as Russia did during the 1980's, or in our own country after the Uncivil War, when our government, after several years of a fiat currency, was getting back to a sensible economy. There were years of economic problems, punctuated by the so-called "Panic of 1873".
Very few people realize it now, but China is liberalizing gradually, and too many of our politicians and talking heads are still stuck in the days of Mao Tse Dong, with China as the enemy, when all China is trying to do is to come into the 21st century after a thousand-year middle age. Also nobody seems to realize that China is also the greatest supporter of our economy, having acquired trillions of dollars of our debt. I should say that I have had no connections with China other than having studied the history and some of the Mandarin language, which is a very fascinating language.
What we really need to do is get back to the gold standard, because no economy in history has been able to endure more than a few years of fiat currency. In my study of history, I've discovered that we are making the same mistake that Rome did, namely using Keynsian economics to pursue stupid, unproductive wars, and look what happened there.
I don't know whether Trump can revive our economy, but any revival will likely be temporary. I wonder how many people realize the extent to which we have used debt to finance our inflated lifestyle and national ego.

In the meantime, you are doing a great job of helping us to get through the present by providing great investment ideas. I am always looking forward to your latest take on the economy. I have done quite well with your recommendations and those of your colleagues. I read all of your writings every month.

Ken,
I totally agree with you about returning to the gold standard, During the campaign, I remember President Trump saying several times that we should return to it. We won't have a useless piece of currency to rely on.

Keith,
When you are on Fox Business News, Lou Dobbs, Kennedy or the Neil Cavuto
shows, could you let us know?