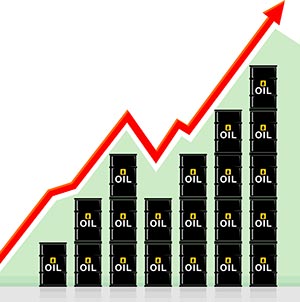 In oil price news today, WTI crude prices are up 1.5% after the Federal Reserve released minutes from its last meeting in December.

Here's a closer look at why oil prices are going up today, and why the Fed minutes are driving oil prices...

In oil price news, there are three big stories that can explain why oil prices are rising today.

Interest rates are important for crude oil prices since oil is priced in the U.S. dollar. That means if the dollar gets stronger, oil prices fall. If the dollar weakens, the price of oil could go up.

WTI crude oil prices soared nearly 2% today before the minutes were released, but current oil prices are now up around 1.5% on the day as of 3:30 p.m.

Traders always watch closely to see which way the Fed is leaning on interest rates. But the minutes showed Fed officials are uncertain about fiscal policy under President-elect Donald Trump.

"We're operating under a cloud of uncertainty at the moment," said Fed Chair Janet Yellen in the minutes.

The Fed's uncertainty about the future might be putting a damper on today's oil price rally. Nonetheless, crude oil prices remain higher on the day.

And that's only one reason why the price of oil is fluctuating today...

Investors have been optimistic OPEC can curb oil supply and raise prices since finalizing the deal on Nov. 30. WTI oil prices have soared 15% since the Nov. 30 announcement.

Now that the deal is in effect, investors may be even more optimistic OPEC will drive oil prices higher.

But, if any countries begin to break from the deal, oil prices could tumble. Non-OPEC members like Russia are the key to making the deal work, so all eyes will be on them as the year unfolds.

Investors looking for oil price news this month should also keep an eye on Jan. 22. OPEC will be holding its first compliance meeting since the deal began. Any signs of dissent could mean the deal isn't going well.

And if the OPEC deal collapses, oil prices will fall quickly.

The third catalyst for oil today is a Reuters report that forecasts U.S. inventory of crude oil has dropped this week. U.S. oil companies draw down their inventories before the new year to avoid taxes on their stock.

If expectations hold true, that means there's less oil in supply, and prices could rise as long as demand stays the same. The effect of low U.S. crude oil inventory combined with the OPEC production cut could push oil prices even higher.