The intensifying global war on cash is destined to give the government more control over your money than ever.

Evidence that most of the world's governments are working toward a "cashless society" has mounted over the past couple of years.

The latest government to launch a major assault in the global war on cash was India. This could foreshadow what's to come in the United States...

This Is What a Government War on Cash Looks Like

In November, Indian Prime Minister Narendra Modi shocked his citizens by announcing a plan to ban existing 500- and 1,000-rupee notes. 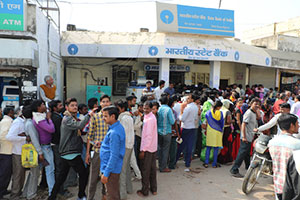 Crowds of citizens line up at a bank in Narvar-Shivpuri, India, on Nov. 13 in the hope of exchanging their old, worthless banknotes for new ones.

Credit Suisse has estimated that more than 90% of consumer transactions in India are made in cash.

"We can gradually move from a less-cash society to a cashless society," Modi said.

Modi gave his citizens until the end of 2016 to exchange the old banknotes - now no longer spendable -- for new ones. But there was a shortage of the new bills. People were waiting in long lines at ATMs and bank branches, often to be disappointed as supplies of the new banknotes ran out.

And those who had a large amount of cash to exchange - 250,000 rupees (about $3,687) or more - by law had to explain why they had so much cash as well as prove they had paid the required taxes on it. If they couldn't, they got slapped with a fine equal to 200% of the tax owed.

Still, those folks are better off than the 16 million Indians who live overseas. They had no way of exchanging their now-worthless rupee notes unless they could get back to India. Many lost the equivalent of thousands of dollars.

This sudden, unexpected strike in the war on cash has been a nightmare for the people of India.

And not only could it happen here - it's practically inevitable...

The U.S. War on Cash Has Already Started

But lately talk has ramped up about eliminating the $100 and $50 bills. This echoes sentiment in nations such as Australia, which in December announced plans to study the elimination of its $100 banknote.

Former International Monetary Fund (IMF) Chief Economist and Harvard University professor Kenneth Rogoff published a book in 2016 entitled "The Curse of Cash." In it he promotes a plan to eliminate larger banknotes in stages. First the $100, then the $50, then the $20, leaving the $10 as the largest denomination.

In February 2016, former Treasury Secretary Larry Summers wrote a piece for the Washington Post headlined, "It's time to kill the $100 bill." In the article Summers calls for "a global agreement to stop issuing notes worth more than say $50 or $100."

And in March 2015, U.S. Federal Reserve Chair Janet Yellen remarked that "cash is not a very convenient store of value" in a Q&A session following a speech on monetary policy in San Francisco.

More ominously, the Bank Secrecy Act requires U.S. banks to alert the government when a customer seeks to withdraw $10,000 or more from an account. It's very much like what India is doing now.

Other Western democracies, such as France, Spain, and Italy, all have reduced the maximum allowed cash transactions in the past couple of years.

This requirement is a key part of the war on cash, as it both discourages large cash transactions while giving government another tool to monitor citizens' financial activities.

But a key question is why governments are so keen on moving toward a cashless society. Here's what they'll tell you...

How Governments Will Try to Sell You on a Cashless Society