The map of the United States is already looking greener than ever, and now there are five more U.S. states that could legalize marijuana in 2017...

So far, a total of 29 states have legalized marijuana in some form, including the District of Columbia. 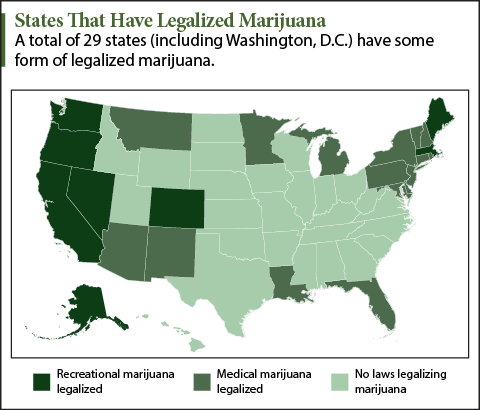 This bodes well for those invested in marijuana stocks. As more states legalize marijuana, new opportunities for cannabis companies are created, according to Money Morning Director of Technology & Venture Capital Research Michael Robinson.

"In November, voters in five states (read, five juicy untapped markets) voted to legalize medical and recreational marijuana," Robinson said. "That boosted the cannabis niche's growth prospects immensely. Remember, this is an investing arena that was already expected to grow by more than 31% a year until at least the early 2020s."

Robinson has developed an entire 90-page marijuana investing guide, which includes the top marijuana stocks every investor should consider right now. In just a moment, we'll show you how to get Robinson's guide completely free.

But before we do, let's discuss the five new states that could legalize marijuana this year...

New States That Could Legalize Marijuana in 2017: Rhode Island

It is currently illegal for adults in Rhode Island without a medical license to have or grow marijuana. However, the state is one of 20 in the U.S. that doesn't jail people for simple possession.

Marijuana advocates are pressuring Rhode Island officials to consider legalizing marijuana this year, and many expect full legalization. After all, the state's neighbor, Massachusetts, fully legalized cannabis for adults older than 21 on Election Day.

The Marijuana Rhode Island coalition, a marijuana advocacy group, will be closely working with lawmakers to pass The Marijuana Regulation, Control, and Taxation Act. The group will be making sure that the bill is voted on and ultimately passed, according to the Marijuana Policy Project (MPP).

Most recently, Rhode Island Gov. Raimondo said that lawmakers were "looking at it (marijuana legalization)," but that he'd want to make sure the state legalized marijuana in a way that kept people safe, according to the Providence Journal.

By 2020, the Massachusetts marijuana industry could be worth $1.1 billion, according to ArcView Market research.

New States that Could Legalize Marijuana in 2017: New Jersey

New Jersey Gov. Chris Christie has been staunchly opposed to marijuana legalization in his state.

But Christie, while defiant, also knows his limits. His term ends on Jan. 18, 2018, and New Jersey lawmakers are eager to pass marijuana legalization...

In 2016, bills to tax and regulate marijuana were introduced by the New Jersey Assembly, receiving bipartisan support. New Jersey Senate President Stephen Sweeney even said he's certain the industry can be regulated safely. He added that lawmakers intend to vote and pass a bill as soon as Christie leaves office, according to the MPP. But that vote may take place even sooner...

One lawmaker, Sen. Nicholas Scutari, said he and his colleagues could schedule a vote just before Christie's departure - in late 2017, according to Weed News.

New Jersey currently has a medical marijuana program that was signed into law in 2010, but implementing it has been challenging.

The program currently serves fewer than 8,000 patients, according to the MPP. That's a much lower proportion than most other states that permit medical marijuana.

Lawmakers now want to remove some of the inconvenient requirements of this law, like the rule requiring patients to be reassessed for eligibility every 90 days.

Similar to New Jersey, the next state we're about to show you could also legalize recreational marijuana.

And there's a strong chance a bill could pass in this state by early 2017...

New States that Could Legalize Marijuana in 2017: Delaware

Delaware officials will discuss recreational legalization in early 2017, according to Weed News. Delaware decriminalized cannabis last year, which eased some of the penalties for possession. The state also permits medical marijuana. So legalizing recreational marijuana wouldn't be an unexpected jump...

One state lawmaker, Sen. Margaret Rose Henry, has pledged to introduce a recreational marijuana bill this year. If so, it would have a lot of public support.

A recent University of Delaware poll shows that 61% of Delaware residents support marijuana legalization, according to the Delaware State News.

The bill may also have support from Delaware Democratic Governor-elect John Carney, too. Carney has previously been supportive of decriminalizing marijuana in his state.

Expect her recreational marijuana efforts to be successful this year, too.

New States that Could Legalize Marijuana in 2017: New Mexico

New Mexico already allows medical marijuana and could expand its marijuana law to cover recreational use this year.

New Mexico's congress is currently stacked with Democrat majorities, which is a favorable condition for passing any kind of marijuana law. The Democratic Party officially added marijuana legalization to its party platform last year.

In addition to helping with its budget deficit, passing a recreational bill could also help New Mexico control illegal cartel activity within its borders.

"We want to take control of cannabis out of the hands of drug cartels in Mexico who are using profits to rape and murder people and put profits in the hands of legitimate business people and the government," Rep. McCamley said to KOB4 News on Dec. 30.

New States that Could Legalize Marijuana in 2017: Vermont

The senate passed S. 241, which would have ended Vermont's ban of recreational marijuana. The bill, however, was later struck down in House.

Many expect the state to try to pass recreational marijuana again in 2017, according to the MPP. Both House and Senate leaders came together after the bill originally failed, promising to study the issue further.

On Nov. 8, Vermont elected a new governor, Republican Phil Scott. While Scott said he's not yet ready to support marijuana, the legislature could persuade him in 2017. Since Massachusetts and Maine have already passed marijuana, this adds extra pressure to Vermont's lawmakers.

Researchers from the nonprofit RAND Corporation estimate that Vermont could collect between $20 million and $75 million annually in marijuana taxes.

With more states set to legalize marijuana in 2017, now is the right time to start investing in marijuana stocks.

This "bible of weed investing" reveals the world's top marijuana stocks every serious investor should consider right now. Normally valued at $499, it can be yours absolutely free.

To learn how to get your free copy, click here. This offer is only available to the first 500 people who respond today. So please go here now to reserve your copy.

I think cannabis should be legal,I would love to have some.

I am looking into being a part of the cannabis industry. I am a 4yr vet recently separated from the Navy, Do you have any advice on starting the process and if there's resources for vets for funding's, business plans etc. Any advice would be appreciated. Thank you