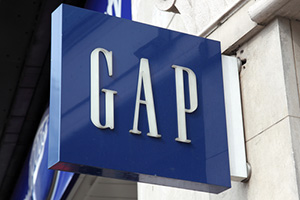 The final jobs report of 2016 also marks the last under the Obama administration.

With the unemployment report out of the way, investor focus turned to stocks. Here are the three top stocks to watch today.

Gap reported late Thursday that comparable sales for November and December rose 2% year over year. Those were driven by sales at Gap and Old Navy. The company's comparable sales in December rose 4% versus a 5% decrease in the year-earlier period. Same-store sales at its signature Gap and Old Navy brands climbed 1% and 12%, respectively. But sales at Banana Republic were a disappointment, falling 7%.

Overall revenue for the five-week stretch ended Dec. 31 rose 3% to $2.07 billion. The company now expects full-year adjusted earnings per share to come slightly above the high end of its previous guidance range of $1.92.

Tuesday, a federal judge refused to throw out a court verdict upholding two Amgen patents related to the company's cholesterol drug. The move is a sharp blow for Paris-based Sanofi and New York-headquartered Regeneron.

In an October 2014 lawsuit, Amgen sought to stop Sanofi and Regeneron from selling Praluent. The drug is intended to lower "bad" (low-density lipoprotein, or LDL) cholesterol by blocking a protein known as PCSK9. Amgen makes a competing drug called Repatha. Amgen maintained Praluent infringed the patents related to the protein.

In March, a jury found Amgen's patents valid. Following that verdict, Sanofi and Regeneron moved to have the verdict overturned and order a new trial. A federal judge denied that motion on Tuesday.

The U.S. Food and Drug Administration approved Praluent and Repatha to treat bad cholesterol in 2015. The drugs are pricey and cost much more than other treatments targeting bad cholesterol -- topping $14,000 annually.

Amgen shares are up 147% over the last five years.

Toyota Motor makes our stocks to watch today list because it has become the latest target of President-elect Donald Trump. Trump had some sharp word for the automaker Thursday that has sent shivers through the entire auto industry. 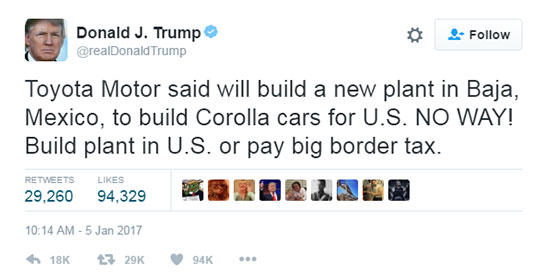 The tweet rattled the auto industry. Shares of major Japanese and South Korean automakers tumbled by as much as 3% on Friday, after the president-elect broadened his criticism of the auto industry to include a foreign car maker with extensive operations in the United States.

Toyota Motor President Akio Toyoda extended a sort of olive leaf to Trump after the criticism, saying that maintaining a good relationship with Donald Trump is critical. The U.S. is one of Toyota's largest and most lucrative markets.

Still, the Japanese automaker aims to substantially increase its footprint in Mexico at a time when Mr. Trump has lambasted American car manufacturers for sending jobs overseas. A few weeks before the U.S. presidential election, Toyota said it would expand production at an existing Mexican plant. In November, the company broke ground on a new $1 billion plant in Mexico.

Get on the Path to Greater Wealth: Timing is everything when it comes to making money in markets - and this new, free service we created puts timing on your side...
Related Articles: