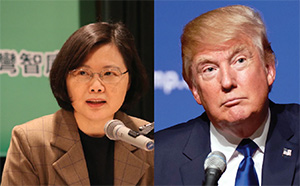 As far as the U.S. is concerned, it acknowledges – and has acknowledged for over four decades – that there is one China and that Taiwan is a part of China.

"The United States does not challenge that position," states the 1972 Shanghai Communiqué, drafted under President Richard Nixon.

Nonetheless, Washington has maintained commercial ties with Taiwan in the nearly 40 years since the communiqué's creation.

But recent dealings between the U.S. and Taiwan have drawn exceptional ire from Beijing.

Beijing officials have been keeping close tabs on Tsai, Taiwan's first female president, since she first assumed office in May 2016. The Red Dragon believes she's eager to lobby for the island's formal independence and may even be in the process of taking her "Independent Taiwan" promotion to the West.

China has also been watching Trump's political moves and statements since he first announced his bid for the presidency on June 16, 2015. During the entirety of the real estate mogul's presidential campaign, China issued a slew of warnings to remind Trump about adhering to the "One China" policy.

But about a month after officially winning the election (on Dec. 12, 2016), Trump told FOX News that "I fully understand the 'one China' policy, but I don't know why we have to be bound by a 'one China' policy unless we make a deal with China having to do with other things, including trade."

Trump also stated the he doesn't want to be "dictated" by China.

Global Times responded to Trump's interview in December by suggesting that the Chinese government prepare to seize Taiwan by force before the new U.S. administration "activates the Taiwan card" to dictate terms in mutual relations. "It might be time for the Chinese mainland to reformulate its Taiwan policy, make the use of force as a main option and carefully prepare for it," it added.

Today, the Beijing news outlet stated that "sticking to [the One China] principle is not a capricious request by China upon U.S. presidents, but an obligation of U.S. presidents to maintain China-U.S. relations and respect the existing order of the Asia-Pacific. If Trump reneges on the one-China policy after taking office, the Chinese people will demand the government to take revenge. There is no room for bargaining."

Policy insiders and political apparatchiks were aghast when Trump took a congratulatory call from Taiwanese President Tsai Ing-wen, then tweeted about it. And they couldn't wait to explain the "gaffe."

Only it wasn't a gaffe at all.

What Trump did was brilliant and potentially very, very profitable.

Here's what everybody is missing…

This one China agreement is 40 years old … Leave it alone or we will see civil war in China..for once in US history let the people's of China settle their differences without the interference of US…in any war conventional or nuclear WE LOOSE conventional war they can throw 1MILLION FIGHTERS AT US…IF WE KILL THEM NO PROBLEM THEY CAN DO THAT 3 OR 4 times while we would struggle with putting together our. 1St MILLION WITH NUKES THE WHOLE WORLD LOOSES