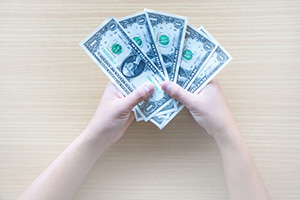 The Dow Jones Industrial Average today slipped thanks to a downturn in crude oil prices, but that didn’t stop the Nasdaq from hitting another record high.

Gold prices and silver prices each climbed more than 0.8%.

Let’s look at the numbers from Monday for the Dow, S&P 500, and Nasdaq:

Now, here’s a look at today’s most important market events and stocks, plus a preview of Tuesday’s economic calendar.

The Dow Jones slipped 76 points Monday thanks to a downturn in crude prices. Optimism over job creation and economic growth couldn’t push the Dow Jones any closer to the psychological barrier of 20,000.

It was mostly a quiet day for economic data. However, several members of the Federal Reserve made statements on monetary policy and their expectations for the incoming Trump administration. Atlanta Federal Reserve President Dennis Lockhart said the economic crisis is "largely done." He urged his fellow central bankers to step aside and let the economy walk on its own. Boston Fed President Eric Rosengren also called for the central bank to accelerate the number of interest rate hikes in the year ahead.

Crude oil prices plunged on concerns that OPEC’s production deal to cap excessive supply will not happen. Investors are worried producers are increasing rigs and expanding production. Iraq is OPEC’s second-largest producer and announced that output from the nation’s Basra ports hit a record high in December.

On the same day that President-elect Donald Trump praised Ford Motor Co. (NYSE: F) and Fiat Chrysler Automobiles NV (NYSE: FCAU) for its commitment to job creation and investment in the United States, Alibaba Chairman Jack Ma made a stunning announcement of his own.

The president-elect met with Ma today to discuss plans to create 1 million new jobs in the United States. Alibaba plans to expand trade between small businesses in the U.S. Midwest and Southeast Asia. Ma says the goal to create 1 million jobs can be reached by allowing U.S. small businesses and farmers to trade goods with Asian consumers through Alibaba’s consumer platforms. Shares of BABA stock gained more than 1% on the day.