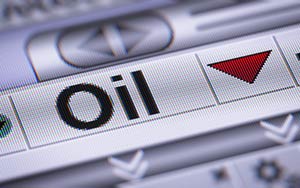 The Dow Jones Industrial Average today dipped after flirting with the 20,000 level once again.

The Nasdaq hit another record high, which helped keep volatility low. The CBOE Volatility Index (VIX) – which is considered the market's fear gauge – fell 0.6% on the day to 11.49.

Investors are taking a wait-and-see approach as earnings season kicks into full swing with the reports coming from Bank of America Corp. (NYSE: BAC), BlackRock Inc. (NYSE: BLK) and JPMorgan Chase & Co. (NYSE: JPM) this week. Bank of America got off to a good start by gaining nearly 2% on the day.

It was another light day of economic data, but there was just enough action to bolster confidence in the U.S. economy. This morning, the National Federation of Independent Business's index measuring small-business optimism hit its highest level since 1980. Small businesses around the nation are the most hopeful about the direction of the U.S. economy after the election of President-elect Donald Trump in November.

Tomorrow will be a very important day for the oil markets as investors eye a weekly inventory report from the U.S. Energy Information Administration. Although OPEC countries like Saudi Arabia appear to be making progress toward their production cuts, the global oil cartel received some startling news. Iraq, the cartel's second-largest crude producer, announced that its exports from its southern ports hit an all-time high last month.

But the big story today is the price of gold.

Investors have one major question on their mind with the U.S. Federal Reserve and President-elect Donald Trump on a collision course: Are gold prices going up in 2017?

Gold prices have slumped in recent months thanks to a surging dollar. The greenback has benefited from the presidential election and the Fed's decision to raise interest rates.