Money Morning Members who've been with us a while will remember my 2016 Forecast, when I called for the S&P 500 to drop 10% to 15% and predicted Marco Rubio would be headed to the White House.

Well, stocks hit my predicted target in the first month of 2016... and then spent the rest of the year recovering and rallying until well after the election Donald Trump won.

That's a fancy way of saying I was wrong, by a long shot. Now, in my free service alone, I made 14 very profitable long and short stock recommendations. But instead of the crash I expected and markets frankly deserved, we got an endless rally, albeit one totally divorced from economic fundamentals.

That said, I may be the only guy currently in financial media who can honestly and freely admit that he was wrong. I've never shied away from making tough calls and holding people (including yours truly) accountable.

That's always been true, and that's the one thing that won't change in 2017.

Stocks, on the other hand, are in for quite a year. And passive, complacent investors could have a very rough time.  I'll give it to you straight, right now, in my official outlook... 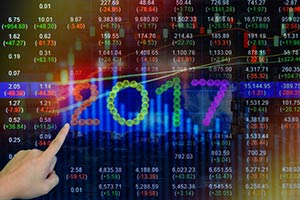 I expect more volatility next year, based on much greater policy and geopolitical uncertainty - though central banks will keep suppressing volatility as much as they can.

Traditional measures tell us that the S&P 500 is trading at ~22 times trailing earnings and ~18 times forward earnings, ~125% of GDP, and ~28 times Shiller Cyclically Adjusted Earnings (70% above their long-term average).

These are high multiples, by any measure, and I think higher earnings and higher multiples are going to be difficult to come by over the next 12 months.

Yet markets keep demonstrating that they can trade higher because they are driven by sentiment and machines rather than fundamentals. But sentiment can vaporize in the blink of an eye, and machines can make mistakes. I prefer to stand on solid ground, and it's what I want for my readers. And an over-indebted global economy and geopolitical fracture zones do not constitute solid ground in my book.

Now, I do not believe that policymakers can perpetually delay the day when the market starts trading on fundamentals once again.

Higher range but first there will be a correction, and it is all fake for some more years 2600 possible. For
it is with ETFs as with fly-paper, fly-papers are running the risk of catching to many flies – a bad and silly metaphor – what I mean is ETFs are fly-papers for risk. Stock picking is harder – and to state the obvious; dont confuse long-plays with trend/moment trades – for this ETFs work wonders – risky paper.
make sense?

That range forecast is really not meaningful or useful without some estimates of timing. If it drops 20 by April and then rises 7 from that bottom it's in your range or rises 7 then drops 10 its in your range.
Put some probabilities into your forecast! What's your call for a 10-15% drop; 75% between April and July ????, etc.
If you believe the market will advance 7% in 1h 17 then give the readers a conviction number or if it will fall 2h 17 by 12-15% then forecast that but, not this useless range number.