Investors looking to take advantage of rising oil prices have turned to crude oil stocks in 2017. But, even though oil prices have risen 16% since the OPEC deal on Nov. 30, not every oil stock is worth owning.

Investors are right to target oil stocks as crude oil prices rise. The NYSE Arca Oil Index (NYSE Arca: XOI) is an index tracking the performance of oil companies across the industry. XOI is up 9.3% since Nov. 30.

But just because oil stocks have risen doesn't mean they are all good investments.

We'll show you some of the best oil stocks to buy, including one with 47% gains in 2016. Before we get to that, these are the crude oil stocks investors should avoid in 2017...

Oil "supermajors," or Big Oil, are massive oil companies largely consolidated in the 1990s. These oil companies handle everything from exploration, production, refining, transportation, and even gas stations.

Big Oil is performing well since the OPEC deal was announced on Nov. 30. The chart below shows positive gains for all the supermajor oil company stocks since the end of November. But those gains are misleading... 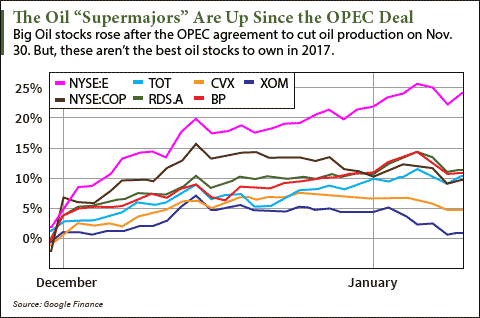 While these may be some of the biggest and most recognizable oil companies, Money Morning Global Energy Strategist Dr. Kent Moors says investors should avoid these behemoths in 2017.

Moors' analysis comes from 35 years in the oil industry, where he served as an energy policy advisor to countries like the United States and Russia.

The stocks may be up for now, but Moors says oil supermajors are too interested in huge, expensive "megaprojects" that simply drain money.

You see, one of the biggest perks of owning shares in oil supermajors is their dividend payouts. If Big Oil didn't pay dividends, their stocks would be far less attractive. That's why maintaining their dividends is one of their top priorities.

But, since oil prices have fallen from over $90 a barrel in 2014, the supermajors have shed valuable assets to pay off the debts from their massive projects just to keep their dividends on schedule.

"This may give them the money they need to pay out their dividends in the short run," says Moors, "But in the long term, each one reduces how much money they make in the future."

For instance, Royal Dutch Shell is currently trying to unload $30 billion of its North Sea assets. The Financial Times reports the asset dump "is crucial to Shell's efforts to defend its prized dividends."

Chevron is dumping assets, too.

"Chevron is selling assets, cutting jobs globally, and slashing capital spending to save cash in a bid to preserve its dividend amid weak oil prices," says a Dec. 23 Reuters report. The report details that Chevron just sold $3 billion of its geothermal assets in the Philippines in December 2016.

That's why investors shouldn't be fooled by recent stock price gains. Big Oil companies are making short-term decisions at the expense of their long-term profitably.

If you're investing in oil stocks, you can find better companies that aren't burdened with this kind of debt. Because the supermajors have been selling off assets to raise cash, they've missed out on where the "real money in oil was being made," according to Moors.

That's in places like the tight oil fields of the Permian Basin in Texas. The top three producers there are independent oil companies, not the supermajors.

And as oil prices rise, companies focused on where the "real money" is being made will reward their owners with rising share prices.

We have a few stocks that have done just that, with gains of up to 47% last year alone. These are the best crude oil stocks in 2017...