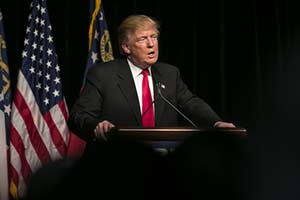 The Dow Jones Industrial Average today was its lowest of 2017 as investors seemed unimpressed by Donald Trump's press conference on Wednesday.

The president-elect failed to convince markets that he would enact corporate tax reform, income tax reform, and deregulation in the financial, energy, and agricultural markets. Instead, Trump took direct aim at pharmaceutical companies over drug prices, called CNN "fake news," and threatened to impose tariffs on companies that make products outside of the United States.

The Dow Jones slipped 63 points, while the Nasdaq fell for the first time in 2017. It was a tough day in the technology sector. Shares of Microsoft Inc. (Nasdaq: MSFT) dipped more than 1.5%, and shares of Apple Inc. (Nasdaq: AAPL) dropped almost 1%. The two companies were the largest drag on the Nasdaq.

Insurance stocks generated the most buzz today after the U.S. Senate passed its first big hurdle in repealing the Affordable Care Act. Shares of UnitedHealth Group Inc. (NYSE: UNH), Express Scripts Holding Co. (Nasdaq: ESRX), Aetna Inc. (NYSE: AET), Anthem Inc. (NYSE: ANTM), and Cigna Corp. (NYSE: CI) all pushed higher after the Senate voted 51 to 48 to approve a budget that would allow Republicans to move forward without having to worry about a filibuster by Democrats.

Gold prices hit a seven-week high after Donald Trump's press conference. In recent weeks both gold and silver prices have declined thanks to increased optimism over Trump's economic policies and forecasts by the U.S. Federal Reserve for three interest rate hikes over the next year.

Money Morning Resource Specialist Peter Krauth argues that these factors have pushed gold and silver prices to a bottom. With prices this low, now appears to be the ideal time for investors to take advantage of the situation and buy into two commodities that are poised for a big bump in the year ahead. Here is Krauth's latest gold and silver price forecast.

Crude oil prices were surging higher for the second consecutive day thanks to increased optimism over OPEC's deal to cap excessive production and some developments in China. According to a new report, auto sales surged in China in 2016 by 13.7% compared to the previous year. The report is seen as a sign that crude demand is poised to surge in the world's most populous nation.