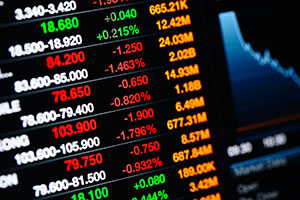 The Dow Jones Industrial Average today is rising in pre-market trading as investors prepare for the "unofficial" start of earnings season.

On Friday the 13th, Wall Street is prepared for a busy day in the financial sector as we finally determine if banking earnings reports can justify the recent rally we've seen from stocks over the last two months.

On Thursday, the Dow Jones slipped 63 points, while the Nasdaq fell for the first time in 2017. It was a tough day in the technology sector, while insurance stocks pushed higher after the U.S. Senate began the process of repealing the Affordable Care Act.

The Dow Jones Industrial Average projected a 12-point gain as investors prepare for a heavy day of earnings reports from several of the nation's largest financial institutions. The S&P financial sector has gained 17% since the election of Donald Trump. Now, the markets are expecting big things from banking stocks as we prepare for higher interest rates and another round of Wall Street deregulation. Keep an eye on earnings reports from JPMorgan Chase & Co. (NYSE: JPM), Bank of America Corp. (NYSE: BAC) and BlackRock Inc. (NYSE: BLK).

The Dow Jones is now up more than 9% since the election. On Wednesday, Bank of America warned that the index could fly a little too close to the sun in the weeks ahead. Calling it the "Icarus trade," Bank of America warned that the markets could "melt up" 10% in the first half of 2017 before reversing course. The bank warned of a potential downturn in the second half of the year. "It's getting long in the tooth," BOA analysts wrote in a research note. "The thing about a melt-up is you get a lot of people chasing it."

The markets will once again be paying attention to statements from members of the Federal Reserve. Later today, keep an eye out for a speech by Philadelphia Fed Bank President Patrick Harker. The speech comes a day after Fed Chair Janet Yellen expressed increased optimism over the short-term outlook of the U.S. economy. During a town hall meeting with academics, Yellen said that in the "short term, I would say I don't think there are serious obstacles. I see the economy as doing quite well."

Crude oil prices were falling due to uncertainty about whether OPEC countries will honor their commitment to cap excessive production. Despite expectations that OPEC and 11 non-OPEC nations will continue their cuts ahead of a meeting in Vienna, Austria, later this month, traders will be keeping an eye on a key report from Baker Hughes Inc. (NYSE: BHI) this afternoon. U.S. crude producers have steadily increased the number of production rigs over the last 10 weeks.

On Thursday, Rep. Paul Ryan (R-WI) said that the GOP will repeal and replace Obamacare. The statement comes shortly after the U.S. Senate took its first steps toward repealing the law after it passed a new budget by 51 votes to 48 votes. But the deal is far from done.

As Money Morning explains, there are several Republicans who could kill the Obamacare repeal process. That's because ACA repeal could add $9.7 trillion to the national debt over the next decade. Here's how...