Gold prices are seeing a mild corrective pullback Friday after hitting a six-week high on Thursday. Still, the gold bulls are out of the shoot in good fashion to begin the new year. Wednesday's press conference by U.S. President-Elect Donald Trump was unsettling to much of the marketplace but it did help out safe-haven gold.

Trump has made bold claims on how he's going to improve U.S. economic conditions, but has so far provided very few specifics on how he's going to accomplish such. It appears that traders and investors are becoming more jittery about that situation as Trump prepares to take office late next week.

The key "outside markets" on Friday morning see the U.S. dollar index lower. Prices Thursday slumped to a four-week low. The greenback bulls have faded badly recently to suggest a market top is in place for the dollar index. The other outside market finds Nymex crude oil prices trading lower. There are stiff technical chart resistance layers that lie just above the market. 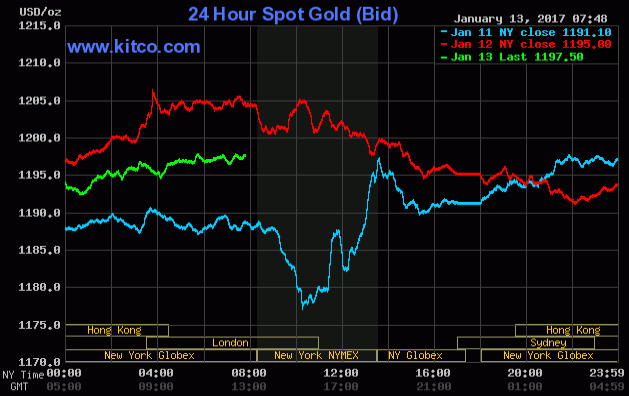