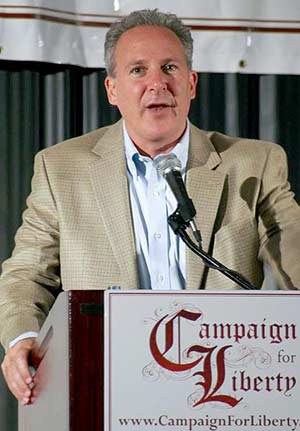 "I think a lot of this optimism is unfounded. I mean yes, there may be some regulation that gets repealed under a Trump administration, but we have been disappointed in the past," he told his viewers...

Schiff noted that under many Republican presidents, regulations have been installed that actually hurt the economy, such as the Americans with Disabilities Act under former president George H.W. Bush. "That caused all sorts of problems for small business," he said about the act.

According to the CATO Institute, the ADA actually harmed its intended beneficiaries. "The added cost of employing disabled workers to comply with the accommodation mandate of ADA made those workers relatively unattractive to firms," CATO noted in its 2000 report.

The radio personality then went on to describe the one place he believes government overreach is at its finest: the healthcare system.

Like the Bush administration's impact on costs for employers, "It was the government's intervention that's fueled the skyrocketing price in healthcare," Schiff claimed.

He then went on to outline his very own plan for healthcare reform in America...

The need for separation of healthcare and employment stemmed from Schiff's belief that workers are incentivized to accept health insurance from an employer instead of cash payments. In other words, employees don't want to receive cash from their employer because that can be taxed. Instead, employees prefer health insurance coverage because it is tax-free.

Schiff's solution: Let individuals fully deduct whatever they spend on health insurance from their income taxes.

"More people will get their health insurance the way they get their auto insurance or their fire insurance or for their homeowners insurance," he said. "Get rid of those incentives, get businesses out of the healthcare industry, and allow individuals to shop around."

The second part of Schiff's plan included specifying which circumstances were "appropriate" for insurance coverage.

"The big problem in medical care is that too many people use insurance for everyday items," he said. "We don't want you spraining your ankle and then billing it to the insurance company - things like that should be paid for out of pocket."

According to Schiff, not using insurance and paying out of pocket with cash for things that aren't life-threatening will reduce the price of healthcare for everyone over time.

"Once you have a third-party player, you no longer have free market controls on costs, and costs skyrocket," he said.

The final segment of Schiff's plan called for the termination of two programs that collectively aid over 105 million Americans, according to a 2015 report by the Kaiser Family Foundation...

According to Schiff, these programs are better left for dead because they take up "too much" time for practitioners and provide a handout for low-income Americans.

"We should be getting rid of Medicare and Medicaid," Schiff said. "Before we had any of this stuff, we had a much better healthcare system. It was more affordable, and doctors had a lot of free time. They didn't have to spend all their time filling out paperwork."

"So, to the extent that there are poor people who couldn't afford medical care, they got it for free," Schiff criticized.

While the Euro-Pacific Capital CEO continues to criticize the American healthcare system, the reality is he is not in a position to do much about it.

But one person is...

Related Articles for You...

I think this Peter Schiff is a real jerk point blank. I have Medicare pay $125 a month plus have to pay extra to get an extra plan to try and live because am paralyzed and need Rx's that the co-pays are a lot then when it start to come to the part cost out of pocket like this clown wants from the start. I'll lose my house and everything I worked for. He should really look at it but oh he's got a job making over 6-digits so he doesn't have to worry about it. If He looked at the real picture,or knew the real truth in life it's Medicaid people get it all for free. The people on MEDICAID get their house paid for to live in Free, RX's for free, Doctor visit's for free, and get money for having kids and the more kids the more money they get. I sure DO NOT and am on MEDICARE,plus paralyzed but not my whole life just since 2005 and all I know I have to pay when gets to my out of pocket, I have to pay anywhere from $ 6000-$10,000 for my RX's and making it Health Insurance like Car Insurance. I will lose my house I worked to get and pay for. You Peter Schiff are really a stupid RICH FOOL WHO HAS a JOB THAT pays for ALL your stuff FREE. So get your head out of your butt and get rid of MEDICAID and have them people work because I make too much money a year to get help from the Government and IT's makes money from EVERYONE ON MEDICARE NOT, Plus Doctor's Get Kick Backs for writing RX's to MEDICARE People Not MEDICAID People SO YOU SHOULD Learn the Truth before you Speak FOOL!!!!!