The price of silver is officially back now that it's posted its third weekly gain in a row.

After a considerable correction that lasted over four months and included a roughly 25% decline, the silver price bounced back in late December.

If the bottom is actually behind us, it came about a week after the gold price bottom – Dec. 15, the day after the Fed rate hike. And the metal's been climbing since.

Silver prices haven't seen the nearly relentless push higher that gold's experienced, but given silver's outperformance since bottoming in late 2015, it's certainly been holding its own.

Don't Miss: Your Guide to Profiting from Silver Prices in 2017

We've seen the metal's price hit overhead resistance recently, a level we'll now be watching carefully. Despite that, there are encouraging signs silver is still primed to head higher.

And we're closely watching one silver price metric that will prove to be the most important in the coming months.

Before we discuss that, here's why the silver price leaped higher last week…

Silver prices kicked off the week with a modest gain. On Monday, Jan. 9, the metal began at $16.47 when it opened for trading. After a mildly volatile ride, the precious metal closed the day at $16.54 for a 0.4% gain.

Tuesday was a more stimulating day to watch. It started out at $16.57, then some buying stepped in and quickly pulled it up to $16.85 at noon (remember that price; it's a key level I'll discuss a bit later). From there, it retreated a bit but still settled 1.3% higher at $16.75.

On Wednesday, Jan. 11, Trump held his first press conference as president-elect. Silver started the day at $16.71, then (like gold prices) bottomed at 11 a.m. But silver quickly bounced back as the press conference progressed, and by 2 p.m. had reached its high for the day at $16.74. The silver price retreated a bit to close at $16.69, logging a slight 0.4% loss on the day.

The price of silver started Thursday strong, reaching $16.93 in early morning trading. It then opened in New York at $16.86, but slowly gave back on the day as sellers overpowered buyers. It settled 0.3% higher at $16.74.

And the action in the U.S. Dollar Index (DXY) is a great reference. Its negative correlation on shorter time frames helps explain some of the movement in silver prices over the past week… 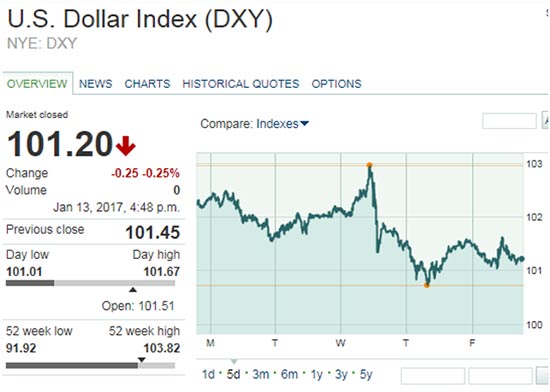 But there's another important silver price indicator that we're watching right now. Silver prices have had trouble moving above this indicator recently, but it could potentially give silver a boost this year…

Watch This Price of Silver Metric in the Coming Months

So what's this overhead resistance that may be stalling out silver's rise?

I'm talking about the 50-day moving average. Right now, that level is at $16.85. And you can clearly see in the past week that silver's had trouble crossing above that line.

It managed to trade through this level on both Tuesday and Thursday temporarily, but couldn't close above it.

I think $16.85 is an important level to watch right now. My sense is that with the gold price already through its 50-day moving average, it's now likely to head higher with momentum on its side.

I'm expecting silver's ongoing catch-up to gold could propel it to $19 in Q1 and possibly help it breach $22 by Q2.

Urgent: An incredibly rare gold market anomaly is shaping up in the markets as we speak — one that has occurred ONLY twice in the past 20 years. And it's about to happen again. Details here…