To find the best tech stocks to buy in 2017, we picked from the four tech trends ready to take off this year.

Sales growth in these industries is expected to rise as much as three times, 12 times – in one case 30 times – by 2020. And the top stock picks in each sector have share-price targets as much as 40% to 100% higher than where they trade today.

You’ve likely been told before these trends are “hot” investments. Thing is, in years past, these particular technologies were not yet mature. Anyone who tried investing in these areas years ago and didn’t see the gains they expected was just too early.

But these industries have changed.

Robinson has a knack for identifying trends on the verge of going big and the stocks to buy to profit from them.

Here’s a quick primer: Virtual reality is completely immersive – you only can see what a headset shows you. In augmented reality, holographic images are superimposed on real world surroundings, often using a tablet or smartphone (example: Pokèmon Go).

Robinson said he first encountered VR in 1991 with the Sega VR add-on to the Genesis console. But in the past few years, the technology finally caught up with the vision.

Last year, VR/AR tech began to reach “critical mass” with consumers, Robinson said, setting it up for a big year in 2017. 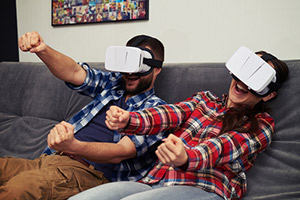 And this market is just getting warmed up.

"AR likely will be a much larger tech sector because its smart glasses, which overlay digital data like blueprints and technical specs, are already ripe for business users," Robinson said. "And we also could see most smartphone functions migrate to AR."

CitiGroup's Global Perspectives Group has forecast that the combined AR/VR market will balloon to $2.16 trillion in sales by 2035.

But Robinson is most excited about a third variation - mixed reality. Mixed reality combines elements of AR and VR.

Don't Miss: The Five Best Infrastructure Stocks to Watch in 2017

Mixed reality is a much more sophisticated augmented reality. In MR, sensors and advanced optics combine realistic holographic images that interact with the surrounding environment (creating a phantom hole in a wall that appears real, for instance).

"I believe 2017 will mark the first year in which MR begins to get attention from Wall Street and the financial media," Robinson said.

One of the best tech stocks to buy for mixed reality is Microsoft Corp. (Nasdaq: MSFT). The HoloLens is among the most advanced versions of MR right now, and Microsoft is positioning it to succeed both as a gaming platform and a business tool.

A tech stock to buy for VR is Facebook Inc. (Nasdaq: FB), which owns the Oculus Rift. The combination of Facebook's massive social media reach and a virtual reality platform opens up a lot of profitable possibilities.

CEO Mark Zuckerberg has called it "a new communication platform" and believes it will allow people to share experiences the way they share photos now.

Another tech stock to buy to profit from the VR/AR/MR trend is Intel Corp. (Nasdaq: INTC).

"This Silicon Valley chip leader is investing heavily in the field and could reap billions from VR and AR in the next few years," Robinson said.

Artificial intelligence is a tech trend that has had its share of hype over the years, but wasn't quite ready for prime time.

But according to Robinson, 2017 is when AI will shine.

"Thanks to breakthroughs made over the past decade, AI is now capable of 'cognitive computing,'" Robinson said. "That means the machines take key data relationships into account so the system can move swiftly onto the next set of data to crunch." 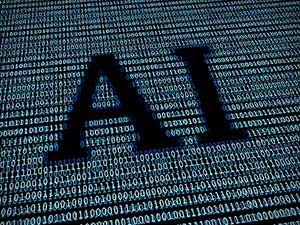 The more capable hardware means AI finally can fulfill its long-promised potential. We're already seeing progress in AI-driven Big Data analysis, online chatbots that help customers resolve common issues, and devices talking to each other -- the Internet of Everything.

This is another market on the brink of explosive growth.

Research firm MarketsandMarkets has forecast that artificial intelligence sales will grow 12-fold from $420 million in 2014 to $5.05 billion in 2020.

Among the best tech stocks to buy for AI is Facebook Inc. (Nasdaq: FB), which already has deployed AI via chatbots on its Messenger platform and has big plans to use AI more widely.

Robinson said that Facebook has made more progress in AI technology than the other tech titans like Apple Inc. (Nasdaq: AAPL) and Alphabet Inc. (Nasdaq; GOOGL, GOOG), particularly in areas like face recognition.

"With AI making Facebook an even more ruthlessly effective social network, the firm will remain in the lead for years to come," Robinson said.

He believes Facebook stock will climb over the next several years, reaching $250 a share by 2020 - nearly double the current price of $129.

Robinson is even more enthused about the tech stocks to buy for his last two 2017 tech trends...

THANKS FOR YOUR PICKS BUT I WAS WONDERING. DID YOU GET PAID FOR ANY RECOMMENDATION.

Thanks for reading Money Morning. No one here ever gets paid or receives any compensation for making any recommendation. In fact, employees must wait just to purchase the recommendations according to these Money Map Press guidelines:

"We expressly forbid our writers from having a financial interest in any security recommended to our readers. All of our employees and agents must wait 24 hours after on-line publication or 72 hours after the mailing of printed-only publication prior to following an initial recommendation."

Hope this clears things up.

Actually I love reading and getting information about money morning news letters so that way I can be knowledgeable for all stock's in money market some like that, that's why I love visiting this website because this is were I learn and get all the knowledge about investing stock's and all other money matters, thanks to this website for being here and for sharing all the information with me. Thanks again, love it…